McCrory unveiled his recommended  $20.6 billion budget Wednesday at the old state Capital building in Raleigh. The budget, the first by a Republican governor in two decades, shores up the state’s recession-depleted reserve funds and shifts money from special taxes and fees that flow to trust funds and other projects and programs with dedicated revenue streams into the state’s General Fund. 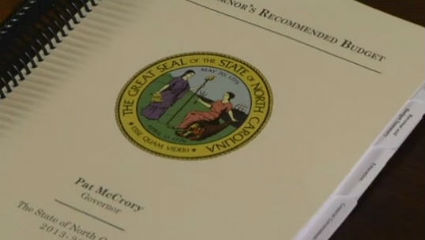 Under the plan, the Clean Water Management Trust Fund, which provides matching money for wastewater and water resource restoration projects throughout the state, is reduced to $6.75 million in the first year of the biennial budget and has no money earmarked for it in the second year of the budget.

For the past two budget cycles the trust fund, which was created in 1996 with a statutory target of $100 million in funding annually, has seen the lowest levels of funding in its history. Last year, the fund received $11 million to cover an estimated $122 million in requests.

At Wednesday’s budget briefing, Art Pope, state budget director, said the low level of funding and the lack of a second-year figure was not an indication that the program was on its way out. This year’s request, he said, was a non-recurring appropriation and a second request for funds would come from the governor next year.

Richard Rogers, executive director of the trust fund, said yesterday that he hopes to make the case to McCrory and legislators of the importance of the fund.

Rogers and his staff are pulling together a list ahead of the fund’s usual  project review and scoring cycle to show legislators some of the critical projects in the pipeline.

“Right now, we’re doing a quick assessment and are looking at 91 applications totaling about $50 million. Looking at that, you can see there’s need in the state,” Rogers said.

With funding drying up, the $50 million in requests is less than half requested in recent years in part, Rogers said, due to the perception that the fund did not have much to work with and in part because of funding caps on individual projects.

“We saw a big fall off in wastewater projects,” Rogers said.

A report to the N.C. General Assembly last May detailed $62 million in unmet local needs, including repair and renovation projects at 28 failing wastewater treatment plants.

Rogers said he was glad to hear Pope say the governor is open to feedback. He’ll try to make a detailed case on the need, but also a practical one. “When we don’t have as much money, we just don’t get as much done,” he said.

McCrory’s proposal for the state’s Natural Heritage Trust Fund and the Parks and Recreation Trust Fund are also raising concerns and not just over their budget totals, but in how the programs are funded.

The natural heritage fund, created by the legislature in 1986, provides supplemental funding to select state agencies to buy and protect important natural areas, to preserve the state’s ecological diversity and cultural heritage and to inventory the natural heritage resources of the state. The parks fund provides dollar-for-dollar matching grants to local governments for parks and recreational projects.

The Natural Heritage Fund receives 25 percent of the state share of a real estate conveyance tax and the Parks and Recreation Trust Fund receives the rest. The conveyance tax funds, which hit a peak in 2005-2006, have long been a target for diversion by budget writers. More than $8 million went to General Fund last year.

In addition to cutting the overall appropriation of the natural heritage fund by 57 percent to $4.2 million and the park fund by 44 percent to $15.5 million, McCrory’s budget proposes routing all of the conveyance tax money to the General Fund in the future.

A statement released yesterday by Land for Tomorrow, a coalition of land conservation groups, said the removal of dedicated revenue for the two trust funds was worrisome.

Katherine Skinner, executive director of the Nature Conservancy and a member of the Land for Tomorrow steering committee, said the governor’s budget is insufficient to meet the needs of a growing state.

“The creation and consistent funding of North Carolina’s conservation trust funds have been the result of bipartisan leadership over the past 25 years,” she said. “The land protection successes have played a major role in the state’s economy – boosting agriculture, the military, tourism, forestry, hunting, fishing and outdoor recreation. As our economy continues to recover, we need to continue a strong investment in these economic drivers.”

Grady McCallie, policy director at the N.C. Conservation Network, said the budget runs against the promise by the McCrory administration that it would not produce a smoke-and-mirrors budget.

The idea of moving the dedicated funding streams into the General Fund, which is done in several places throughout the budget, is masking cuts.

“Under the guise of that, they’re slashing programs.” he said. “That has a big impact on the conservation of our natural heritage and the maintenance of state parks.”

Once levels fall too low, the trust funds are left with little money to work with beyond what it takes to sustain the debt burden from previous projects, McCallie added.