OCRACOKE — The Ocracoke Working Watermen’s Association on Jan. 19 will host a training session for a project to monitor baby oysters, or spat. Students and volunteers will be trained to collect and count oyster offspring.  The project, sponsored by North Carolina Sea Grant, is part of a larger effort to understand why North Carolina’s oyster population is in decline.

Meanwhile, on the other side of the country, scientists have puzzled over why the entire batch of 100 million free-swimming baby oysters at Whiskey Creek Shellfish Hatchery in coastal Oregon  have died. The conclusion they reached is alarming, at the least. The struggling larvae were unable to form their protective shells because of highly acidic pH levels in the ocean. High acid levels decrease carbonate ions needed for shell production. 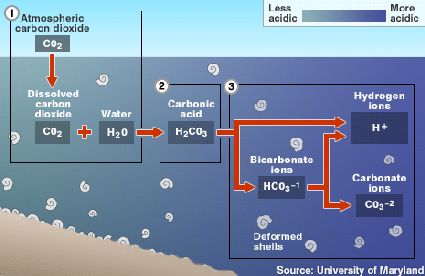 The acidity is the result of excessive carbon dioxide, or CO2, in the ocean, absorbed from the Earth’s atmosphere. The CO2 is the by-product of the burning of fossil fuels –coal and oil, primarily — which also causes global warming or climate change.

In late October, 2012, Hurricane Sandy, later dubbed a “super storm,” grabbed headlines and awoke the American public to the reality of carbon dioxide-induced climate change. Scientists and climatologists had been trying to raise awareness for years, but it took a major disaster to make most people accept its imminent presence and danger.

Few people are aware even now, however, of what some scientists call the “evil twin” of global warming; ocean acidification. This equally serious threat is already showing up in the Pacific Ocean and polar seas, where the cold, nutrient-rich waters from the deep are naturally more acidic than surface waters. While the full brunt of ocean acidification is not expected to hit for decades, it is expected to affect marine ecosystems globally and might even factor into North Carolina’s oyster decline.

Climate scientists define ocean acidification as the ongoing decrease in the pH of the Earth’s oceans, caused by the absorption of human-caused carbon dioxide from the atmosphere. It was once believed that this was a good thing, as it buffered the full effects of global warming on land. Scientists now think differently.

A decrease in pH means an increase in acidity, which can be catastrophic for ecosystems. Acid rain provides an illustration. Emissions of sulfur dioxide and nitrogen dioxide from vehicle exhaust and coal-burning power plants are carried by the wind, often for hundreds of miles, and deposited as acidic rainwater. It can peel paint, corrode steel and erode stone buildings and statues. Acid rain has damaged crops, weakened or killed plants and raised pH levels in freshwater lakes so high that fish and other aquatic animals have died. Acidification may be invisible to the eye, but some of upstate New York’s most beautiful lakes are lasting testaments to its deadly qualities.

Before people began burning coal and oil, ocean pH had been relatively stable for 20 million years, according to scientists at the Natural Resources Defence Council, an advocacy group. Over the last 250 years, roughly coinciding with the Industrial Revolution, oceans have absorbed 503 billion tons of CO2, causing a 30 percent increase in ocean acidity. At current rates, ocean acidity is predicted to more than double by 2100.

This could have serious consequences for near-shore bottom-dwelling ecosystems and for calcifying organisms such as crustaceans, molluscs and echinoderms, such as star fish and sand dollars. Corals, which require very high levels of carbonate, are at even greater risk. Coral reefs, which provide habitat for one fourth of all marine species, could at the present rate of acidification be extinct by 2100.  Pteropods, a kind of plankton that lives around the world and are a major part of the marine food chain, are also especially vulnerable.

The National Oceanic and Atmospheric Administration has been studying falling pH in the ocean and its impact on marine ecosystems for three decades. Its studies have revealed lower reef-building rates in corals, the loss of protective shells in free-swimming zooplankton and lower survival rates of larval marine species including fish and shellfish. The studies predict that there will be substantial socio-economic effects, including decimated fisheries and reduced protection against storm surges as coastal reefs disappear.

The study of ocean acidification is a relatively new science, and all the ramifications are not yet clear.  A September 2012 issue of Scientific American stated that rising CO2 in the oceans affects the mental abilities of some marine life. It cited impaired ability in clownfish to discriminate kin and predators and mollusk larvae wandering farther afield into unsafe waters, making them more susceptible to predation. Other studies document depressed metabolic rates in jumbo squid and depressed immune systems in blue mussels.

The Woods Hole Oceanographic Institute recently conducted a study that revealed unexpected results. It found that while corrosive carbonic acid (formed from dissolved CO2) destroys the shells of clams, oysters, scallops and conchs, CO2 appears to increase the production of calcium carbonate, needed for shell-building, in such crustaceans as lobsters, blue crabs and prawns. Clearly, scientists are a long way from understanding all the effects of CO2-saturated oceans.

In late 2012, scientists from 37 countries met in Monterey, California to discuss these issues. “The Ocean in a High-CO2 World” symposium looked at possible solutions, including spreading vast amounts of limestone on the ocean surfaces. Lime is alkaline and would buffer the acid. The state of Washington recently established a blue-ribbon panel to come up with a plan to cope with ocean acidification, the first state to do so. It outlined 42 steps, including adaptation, remediation, monitoring and reduction.

The warm coastal waters of North Carolina and other states on the Eastern Seaboard have not yet shown the effects of rising pH. Nathan Hall, a researcher at the UNC Institute of Marine Sciences in Morehead City, said that there are already such huge variations in acidity due to pollutants and runoff from the land that, while the long-term effects of ocean acidification are alarming, they are not yet measurable here.

Ocracoke waterman Gene Ballance, who works closely with oyster research and restoration, says that he does not believe acidification has been considered as a cause of oyster decline in Pamlico Sound.  Susan Massengale, a spokeswoman with the N.C. Division of Water Quality, explained that the issue is in the research stage in North Carolina and that the state is waiting until “the science catches up with itself.”

Scientists at National Resources Defense Council, however, think “this change is happening fast, and it will take fast action to slow or stop it.”  All experts agree that the only definitive solution to ocean acidification is to reduce the amount of CO2 humans release into the atmosphere.

Ocean scientist Lisa Suatoni says that our CO2 emissions “may soon challenge marine life on a scale not seen for tens of millions of years.” Oceanographer Jean-Pierre Gatluso predicts that unless the present trend is interrupted, “the oceans will become hot, sour and breathless.”