RALEIGH — A battle that began earlier this year over legislation cutting back the state’s air toxics program starts up anew this week when state regulators seek public comment on changes to regulations on toxic air emissions.

Legislators passed a bill in June that exempts from state law the emissions of toxic pollutants covered under a similar but not as extensive federal law. The bill was one of the most significant accomplishments in the N.C. General Assembly’s ongoing effort to roll back regulations.

The legislation, House Bill 952, was backed by a coalition of industry groups that originally sought to eliminate the state’s program on toxic-air emissions because they say it’s redundant to federal regulations. Instead of killing the program, the bill exempts polluters that have to meet the federal standards.

The N.C. Division of Air Quality is holding a public meeting in Raleigh on Tuesday to hear what people think about the shift to the federal standards and further scaling back state air toxics regulation. The new law required the division to reach out to people on the new rules “to determine whether changes could be made to the rules or their implementation to reduce unnecessary regulatory burden and increase the efficient use of Division resources while maintaining protection of public health.”

Tom Mather, a division spokesperson, said the comments will be included in a report on the new law and any possible recommendations to the legislature’s Environmental Review Commission due Dec. 1.

Mather said a division study conducted last year in preparation for legislative hearings on the new bill found that in most cases there was no problem with the transition from state standards to the federal program.

“We found that if a facility has to meet the federal standard it also would meet the state air toxics standards,” he said. 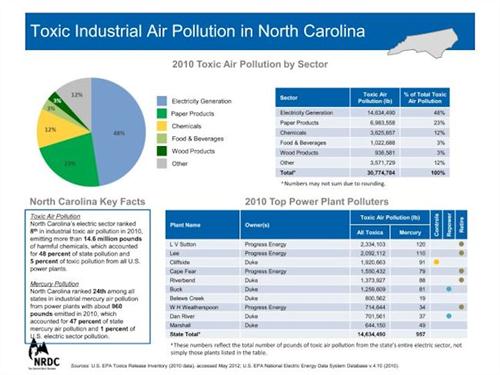 The U.S. Environmental Protection Agency sets the federal standards by industry groups, such as chemical plants, pulp and paper mills and furniture manufacturers. The standards generally specify processes or controls that facilities must use to limit their emissions of hazardous air pollution.

In addition to EPA regulations, North Carolina has a separate air toxics program that is health-based rather than technology-based. The state rule sets health-based limits for about 100 compounds, 21 of which are not regulated under the federal program. Facilities subject to the state air toxics rules must demonstrate that their emissions do not exceed these limits. The complete text of the state rule can be viewed at these pages on the division Web site.

Mather said in the case of air toxics that are not regulated by federal rules, such as emissions from asphalt plants, the state program would continue on.

But that might not be enough to ensure healthy air in the state according to June Blotnick, executive director or Clean Air Carolina, a watchdog group that has been monitoring the state’s moves in air quality.

“We feel the air toxics program that was started 20 years ago has been beneficial,” Blotnick said. “The state program looks out for the health of residents. The federal program is technology-based and doesn’t take into account the effects on nearby communities.”

One major concern about the change to federal standards is that they often don’t reflect the latest medical research, said Dr. Bob Parr, an emergency medicine doctor in Wilmington. He said there is growing evidence that the federal standards in place now aren’t enough. They are not health standards, he said, but political and economic benchmarks.

“They’re years behind the medical literature,” he said.

Parr is a member of Medical Advocates for Healthy Air, a group of more than 300 N.C. medical and health professionals working with the Clean Air Carolina in advocating for stricter rules on emissions.

The group recently came out strongly in support of a new standard for particulates currently under review by the EPA. In a letter to agency administrator Lisa Jackson, Parr and others argued that the EPA should reduce the standard for so-called PM 2.5 — the smaller and more dangerous particulates — from the current annual standard of 15 micrograms per cubic meter to 11 micrograms.

The letter cites a recent report by Earthjustice and others that says adopting the new standard could prevent more than 35,000 premature deaths nationwide. The letter also singles out the planned Titan Cement factory in Castle Hayne, which is expected to emit 160 tons of PM 2.5 yearly.

Parr said the studies show the risks are extend well beyond the vulnerable populations most people think of like the elderly or those with existing respiratory problems. Marathon runners and healthy, active children are at risk as well. And there’s a growing body of research that connects high levels of particulate matter and increased numbers of miscarriages and low-weight births.

Parr said given the new studies he’s even more concerned about the effects Titan’s plant will have on health people in Castle Hayne. He’s also worried about state and federal rules to protect public health getting caught up in the push among legislators for deregulation.

“There’s a lot of talk about the burden of regulation,” he said. “But there should be no debate over public health-based regulation. Regulations to protect human health are vital.”

Meanwhile new reports on air quality continue to paint an unflattering picture of North Carolina. This month the state’s annual output of 30,774,704 pounds of toxic air pollutants made the air here the eighth worst in the country according to a report by the National Resource Defense Council detailing the “Toxic Twenty” states.

Blotnick said given the reports and the new health studies, the state’s moves seem to be headed in the wrong direction.

“It’s short sighted to be cutting back air regulation in North Carolina,” she said.

The Tuesday public meeting will be from 1:30 p.m. to 4 p.m. in the Nature Resource Center, William G. Ross Jr. Environmental Conference Center, 121 West Jones St. in Raleigh, NC 27601. Directions and parking information can be found online.