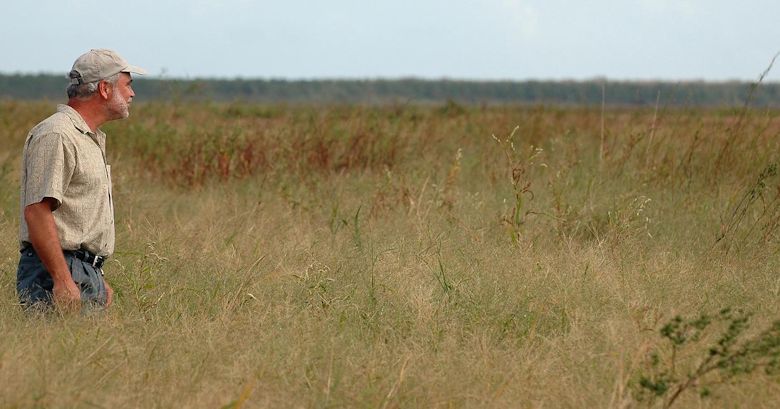 Todd Miller walks through a restored wetland at North River Farms in Carteret County. The federation, in one of its signature accomplishments, is restoring more than 5,000 acres of wetlands in the headwaters of a critical coastal estuary. Photo by Scott Taylor.

Reprinted from the Tideland News

The spanking new N.C. Coastal Federation had to hit the ground running in 1982. There were the peat miners to contend with.

Strip miners wanted to mine the peat soil of the northeast N.C. coast to turn into methanol for fuel. Miller, the federation’s founder sole member, hit the road to organize farmers and fishermen in the region.

“NCCF played an important role in organizing fishing communities to stop large-scale strip mining of 120,000 acres of peat bogs in four coastal counties starting in 1983,” he said last year in an interview after receiving a national award for his decades of work. “The federal government had offered one-half billion dollars in subsidies to private investors, including the former Central Intelligence Agency head Bill Casey, to convert the peat to methanol.

“The land would have been drained and farmed. Intense local opposition to the proposal increased the costs of the project and kept causing delays, and eventually resulted in it being abandoned. That helped set the stage for the formation of the Alligator River and Pocosin Lakes Wildlife Refuges that now protect several hundred thousand acres of wetlands.”

It was not easy, he recalled last week. Farmers and fishermen were at best suspicious, at worst disdainful of environmentalists and academics.

“There’s no doubt we made some people mad in those early days,” Miller said. “We were at odds with a lot of people. We were more confrontational. But the interesting thing is, some of those fishermen and farmers are some of our strongest allies now as we work together to protect and restore wetlands and try to bring about good, reasonable solutions to problems.”

The federation has since been involved in every major coastal policy issue, educating thousands of children and adults, restoring more than 40,000 acres of estuaries and purchasing nearly 10,000 acres of land. Its wetland conservation projects range from small plots with a few volunteers to large tracts requiring millions of dollars and complex partnerships.

The largest has been the North River Farms effort in Down East Carteret County, which Miller has called the federation’s signature project.

“North River Farms … will result in nearly 5,000 acres of wetland restoration in the headwaters of critical coastal estuaries near Cape Lookout National Seashore,” he said. “To date, around 2,200 acres of land have been restored as wetlands, nearly 1,200 acres of wetlands have been preserved and the remaining acreage (about 2,600 acres) will be restored in the next several years. We have already seen remarkable water quality improvements and enhanced oyster reefs in the waters downstream of the restored wetlands.”

In Onslow County, Miller and the federation are best known now for its purchase of part of Jones Island, in the mouth of White Oak River near Swansboro. The organization handed its land over to Hammocks Beach State Park, and the federation and the state are working together on a living shoreline project –building an oyster shell sill and planting marsh grass – to protect the island.

The federation also, quite literally, put stormwater management on the state’s agenda, successfully pushing the state to adopt rules to help keep polluted rain water from washing of parking lots, roads and farmland into coastal rivers and streams. The organization also has been instrumental in getting the state and local communities to focus on low-impact development, again, to limit storm water runoff, which is now known to be the prime pollutant of coastal waters.

When he won the prestigious 2011 National Wetlands Award for Wetland Community Leader from the Environmental Law Institute, based in Washington, D.C., Miller drew high praise from many.

“He has uncanny skills as a diplomat and advocate for the coast,” said Jennifer Derby, chief of the Wetlands and Marine Regulatory Section for the U.S. Environmental Protection Agency’s regional office in Atlanta. She added that his “effectiveness stems from his great knowledge of the issues, a strong environmental ethic, and a respectful approach to people with many different and often opposing viewpoints, all the while having a clever sense of humor and graciousness.”

But Miller said there’s plenty of room for improvement. When asked to rank his and the organization’s effectiveness, he pegged it at 75 percent.

“On all the issues we face along the coast, we have to continually reassess what we’re doing and not assume that the way we’ve done things in the past will continue work in the future,” he said. “And of course there always new challenges. We have to stay energized.”

Miller said he still feels the same zeal he’s always felt for protecting his native region, where he grew up fishing in Bogue Sound, playing in the maritime forests and sailing in what were mostly pristine waters.

“There are always some frustrations and down days, but it’s an amazingly stimulating profession,” he said. “There is still plenty of work to do. And after 30 years, I still need a job: I’ve got two kids to put through college.”