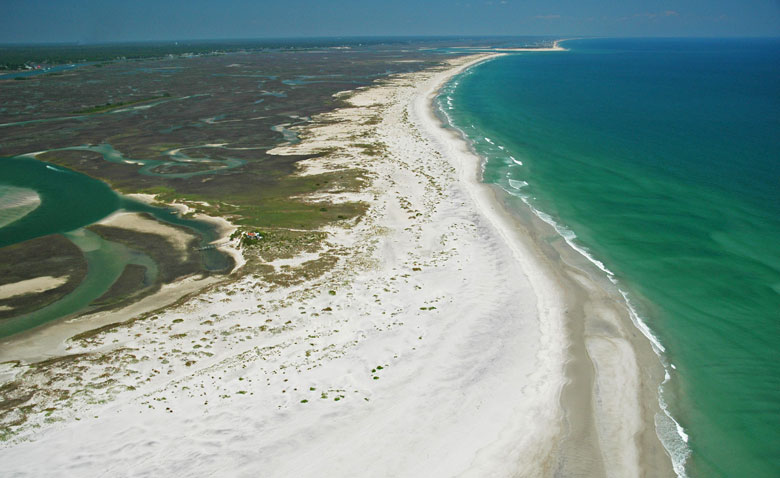 TOPSAIL BEACH — Boastful cries of fish-toting least terns overpower the sounds of waves lapping over the inlet-side shore and the roaring Atlantic Ocean in the background.

Several males in the colony of birds make the “fish call,” alerting the females as to the prize they grip between their small beaks.

On a warm day in early May, before the summer season inevitably draws thousands of tourists to the coast, birds enjoy the serenity of Lea-Hutaff Island.

Addison peers through a Nikon spotting scope mounted atop a tripod she has rested in the shallow waters around the southern end of the barrier island. She has the tedious job of counting the birds roosting and feeding along the shore.“Having areas where they can feed, areas where they can rest is essential to their survival,” said Lindsay Addison, a coastal biologist with Audubon North Carolina. “This is the kind of habitat that they need.”

She picks a group by species, counts, notes their location on the island then records the information in a pocket-sized notepad.

Audubon has been actively tracking birds on Lea-Hutaff since 2007, research that helps its scientists understand the way different species use inlets throughout the year.

“No one has ever looked at the way these birds use the inlets,” Addison said. “The data we’re collecting is unique in that regard.”

Lea-Hutaff offers biologists this rare opportunity because undeveloped barrier islands are themselves a rarity.

Formed between the southern end of Topsail Island and the north end of the exclusive Figure Eight Island, Lea-Hutaff is one of the only un-bridged, natural barrier islands remaining along the N.C. coast.

“It is in a more natural state than about most any other barrier island in the state,” Addison said.

The relatively flat island stretches almost four miles long and is framed by the Atlantic Ocean and two inlets – New Topsail Inlet to the north and Rich Inlet to the south. It was once two islands: The northern one was owned by the Lea family and the southern one the Hutaffs. The islands joined during the 1990s when hurricanes closed Old Topsail Inlet.

The conservation of Lea Island is part of a long-standing partnership between Audubon, the N.C. Coastal Land Trust and the state, which established the Lea Island State Natural Area in 2003. With a generous donation from staunch environmental advocates Fred and Alice Stanback of Salisbury, Audubon North Carolina in 2010 bought almost 36 acres of the Lea portion of the island, nearly doubling the amount of protected land. This year, schoolchildren around the country are raising funds through the Pennies for the Planet campaign to help Audubon’s conservation efforts on the island.

The Hutaffs have not sold their land, but they keep it open to the public.

Altogether, the island includes nearly 5,500 acres of what Audubon describes as “important bird area” – the shores, marsh and inlets.

The shoals of Rich Inlet provide an abundance of marine organisms and small worms – tasty morsels to the thousands of birds who stop here throughout the year.

Migrating shorebirds travel upwards of 4,000 miles. A typical migrating bird will increase its body weight by about 50 percent.

Barrier islands are crucial to the birds not only because they are spots that provide essential food supply, they are also roosting and nesting havens.

Rapid development on the coast’s barrier islands in the past 20 years has depleted the number of places migrating shorebirds may stop, rest, feed and nest.

As a result, most shorebird populations are on the decline, Addison said.

Lea-Hutaff Island is the southern-most extent of the many birds’ breeding range. Audubon officials take great care in posting signs around nests throughout nesting season, which runs April through August, in the hopes of keeping people away.

For the most part, Addison said, people visiting the island respect the wildlife. Visitors are asked to keep their dogs leashed and to stay away from nests, which are protected by state and Federal laws.

As the sea foam green-colored water of Rich Inlet gently washes over Addison’s ankles, she intently counts a roosting colony of red knots. A color-coded band on one of the bird’s legs lets her know that this particular colony has flown up from Argentina. They’re making their way to the Arctic.

“They’re one of the world champion long distant migrants,” Addison said. “They’re definitely only stopping here to rest and refuel.”

She moves carefully, at a calculated distance from the birds. If they flock, she’ll never get an accurate count.

“What we get from the birds is the timing of how they use the inlets by and large,” Addison said. “So many of these birds use the inlets as staging areas to feed. This demonstrates the importance of natural inlets, when sand is able to move freely. Take the piping plovers for example. They feed on shoals like this as the tide exposes them.”

Birds such as Wilson’s plover, American oystercatcher, black skimmer, least tern and piping plover, which are on the federally threatened list, nest and raise their young during the spring and summer on Lea-Hutaff Island.

In the fall and winter, Nelson’s and seaside sparrows gather on the island by the thousands. Last winter, Addison said between 1,300 and 1,400 Dunlin alone were on the island. Loggerhead sea turtles also visit the island’s shore to lay their eggs beginning in May.

Some birds stay on Lea-Hutaff for a few days. Others may spend up to six weeks here.

Addison’s last stop before she re-boards a boat and makes her way back to the Wrightsville Beach is on the northern tip of Figure Eight Island.

“There’s a lot of shorebirds here,” she said as she looks through her spotting scope. “When you think about it, the distance that they travel, they’re pretty remarkable.”

A few yards away, another colony of nesting least terns fly around the area in which their eggs are nestled in shallow pockets of sand.

Addison stops and glances toward the ruckus.

“They’re certainly making a lot of noise today,” she said.