CEDAR ISLAND — Most people who travel through Cedar Island in eastern Carteret County are most likely on their way to or from the state ferry to Ocracoke. They are probably either stressed out as they zip along N.C. 12 in a hurry to catch the ferry or relaxed after a refreshing ferry ride from Ocracoke.  Either way, there is a good chance that they never noticed the highway signs announcing the Cedar Island National Wildlife Refuge. I’ve seen the signs for quite a while but never bothered to stop and explore until recently, and I’m glad that I did.

As I made my way east on U.S. 70 towards Cedar Island, an armada of big puffy marshmallow clouds sailed across a sea of blue sky. I knew that I was officially “Down East” after I crossed the North River Bridge and began to pass through the uniquely named communities of Bettie, Otway, Smyrna, Williston and Stacy. At the turn off to Sea Level, I kept straight onto N.C. 12 and after I crossed over the “thorofare” on the Monroe Gaskill Bridge, I was in Cedar Island. From the top of the bridge you can see a vast marsh that seems to stretch out forever with a tree line marking the horizon.

I cruised on down the road all the way to the ferry terminal passing through the collection of houses on the island. The unincorporated town is inhabited with hearty souls who maintain the strong will necessary to make a living fishing the waters of Core and Pamlico sounds.  The landscape of the town is decorated with boats, nets, crab pots and small seafood houses and the natives still speak with a thick local Old English dialect that is unique to this area of coastal North Carolina.

Many residents stand by the claim that Cedar Island, not Roanoke Island to the north, was the site of the famous English Lost Colony. In 1946, a man named Melvin Robinson wrote the book Riddle of the Lost Colony in support of this claim, which is also mentioned in the 1994 book Cedar Island Fisher Folk by Jean Day.

Over half of the island is now part of the refuge. In 1964, the U.S. Fish and Wildlife Service bought thousands of acres of marsh, pocosin and upland to protect and provide habitat for migratory waterfowl and all other wildlife. Totaling 14,480 acres, the refuge contains 3,480 acres of woodland and pocosin while the remaining 11,000 acres are comprised of brackish marsh.

I turned around at the ferry landing and headed back to find one of the undeveloped trails that cuts through the woodland and pocosin. The easiest one to find was just off the highway and identified with a sturdy iron gate. I brought along my mountain bike to cover more ground and, as I was unloading it, I was greeted by a few mosquitoes. A few months back, federation assistant director and Coastal Review Online editor, Frank Tursi, gave me a stern warning about visiting this refuge. “Go now before the bugs get bad,” he said. I didn’t listen, but I figured I could outrun the mosquitoes on the bike and headed off down the trail.

The loblolly and long leaf pines were scorched at the base indicating that controlled burns wereused here for ecosystem management and fire control. Popping up among the pines were wax myrtle and yaupon shrubs along with a few red bay trees.

My concentration was soon diverted to address the cloud of deer flies and mosquitoes that were hot on my trail. They captured and devoured me. After about only about a mile down the trail, I was forced to abort and race back to the truck. I must have sounded like the cartoon character Muttley as I mumbled my displeasure. The only way I will try this trail again is when it’s covered by a glacier.

With the bike quickly stowed, I drove a short distance to the open marsh area near John Day’s ditch. Local historians report that Mr. Day dug the ditch to stop his cows from roaming off his property. I slid my borrowed kayak into a different ditch that lead out into West Bay. The sturdiness of this super lightweight kayak had me a bit worried since it is basically a thin layer of fiberglass stretched across nothing.

Once on the water, all of my aggression towards the mosquitoes and concerns about the kayak melted away. I was immediately under the watchful eye of numerous diamondback terrapins, their heads popping up like tiny periscopes to track my position. As I headed down the 20-foot wide ditch, a red-winged blackbird showed up and became my companion for the entire trip. Due to the windy conditions, I never ventured too far from the edge of the marsh allowing the bird to leapfrog ahead of me and perch on weather beaten shrubs sprinkled throughout the marsh.

As the ditch opened up into West Bay, fish-hungry least terns performed aerobatic dives into the water in hopes of capturing a meal. This open water around the marsh is a haven for migratory waterfowl such as redhead and ruddy ducks. Scaup, bufflehead, mergansers and canvasbacks also seek refuge in these waters.

The entire Cedar Island efuge is amazingly diverse with 270 different species of birds documented, including the black rail. Black rails are super shy and hide out among the salt marsh cordgrass and black needlerush. It may take even the most avid bird watcher years before they are lucky enough to see a black rail. The vast marsh area of the refuge is an incredibly productive habitat that serves as a nursery for fish and shellfish that supports the local fishing economy. In the woodland and pocosin areas, mammals such as otter, mink, white-tailed deer and marsh rabbits scamper about.

A black skimmer flies past my kayak and is headed to one of the white sandy beaches that line the West Bay shores of the refuge. Yes, that’s right, white sandy beaches that pulled me in like a magnet. Strolling along the beach I quickly discovered quite a few tracks etched in the sand indicating that female diamondback terrapins had crawled ashore to deposit the eggs of future generations. A scattering of dried up egg shells and the impressions of paw prints on the beach revealed that an opportunistic raccoon had searched out a nest and made a meal of these terrapin eggs. As I walked

This magical dragon fly display kept me mesmerized for quite a while. I snapped back to reality and started to feel weak from my earlier mosquito blood drive donation. Reluctant to leave, I was pouting a little bit as I paddled off to find the ditch that lead to my truck. As I rounded one of the marsh points, I lost the leeward protection from the wind and a gust pushed me away from the marsh edge. I began to stow my gear into a dry bag since I knew the choppy waves would throw some spray into the cockpit. Glancing into the water, I saw a ghostly apparition rising from the depths to the surface.  A pristine jellyfish emerged and pulsed along the surface with long tentacles trailing behind like nets off a boat. It undulated with the grace of a ballet dancer before dissolving below the rippled surface as the red-winged blackbird guided me back to my launch site.through a patch of saltmeadow hay to inspect the egg shells, an explosion of dragonflies drifted up into the air and slowly settled back down on the vegetation. Moving along the grass line, clouds of dragon flies continued to erupt around me everywhere I walked. Both the colorful female seaside dragonlet and dark drab male were silently buzzing about. There were thousands, if not, hundreds of thousands of these delicate creatures. But these dainty insects are carnivorous beasts that can, in thirty minutes, devour enough prey to equal their body weight. It’s no wonder that they are so prolific in Cedar Island, their favorite food, you guessed it, mosquitoes!

Back at the truck, with the kayak and bike secured in the bed, the mosquitoes showed up to say goodbye.  But when I think of the Cedar Island National Wildlife Refuge, I will not think of mosquitoes, I will remember the delightful dragonflies. 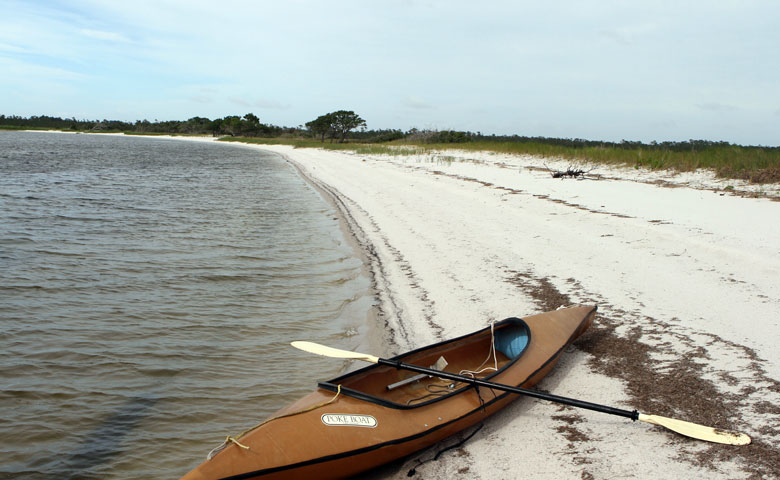 Female diamondback terrapins crawl onto the white, sandy beaches in the refuge to lay their eggs. Photo: Sam Bland