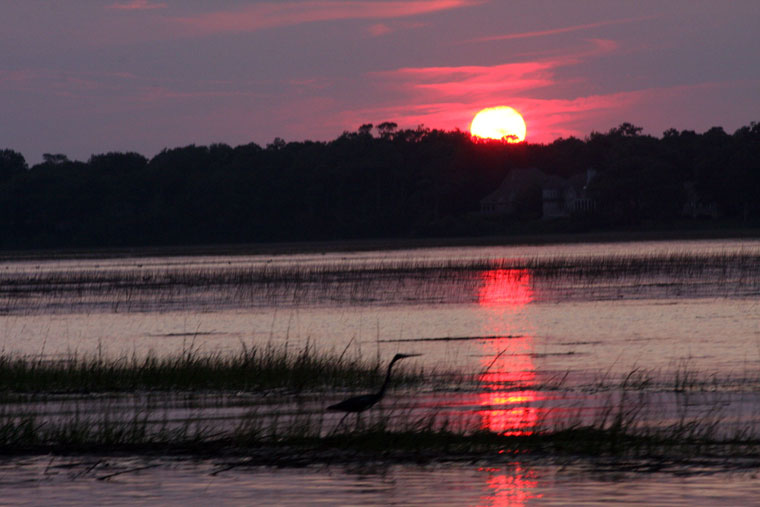 Here’s how Sunset Harbor on the Lockwoods Folly River got its name. Photo:Phyllis Evans

SUNSET HARBOR — Picture this:  As evening approaches, a parade begins.  In the lead are folks on foot.  Some follow on bikes; others, on golf carts.  They are heading toward “the point” for the regularly scheduled show – a stunning sunset.

No, it’s not Key West, where musicians, mimes and magicians entertain the gathering crowd.  Rather, it’s Sunset Harbor, a tiny coastal community, whose residents are drawn to the water’s edge for the sheer delight of watching the luminous horizon transform the Lockwoods Folly River into a kaleidoscope of shimmering color.

“They call it Sunset Harbor for a good reason,” says Joe Taylor, describing the nightly ritual with obvious pride.

Taylor says he never tires of the recurring spectacle and is not shy about declaring his love for the close-knit community – and the Lockwoods Folly River.

His neighbor and friend Dave Pelizzari is in full agreement.  “There is simplicity and beauty here.  You can sit and watch the river for hours and not be bored.  There are surprises in any season – boats, fish, dolphins, birds – we have it all,” he notes.

As though to prove the point that crisp afternoon, an osprey circles overhead and announces its midwinter presence with a familiar high-pitched chirp.

While Taylor and Pelizzari say they leave Sunset Harbor only when they have to, they do make exceptions.  For example, they frequently launch their boats onto the Lockwoods Folly to explore the multi-faceted gem of a river that Mother Nature designed expressly for – and entirely in – Brunswick County.

Diversity marks the full course of the Lockwoods Folly River, which drains a 150-square mile watershed in southeast Brunswick County.  From the river’s headwaters in the pristine Green Swamp Preserve to its inlet that discharges into the Atlantic Ocean between the Oak Island and Holden Beach barrier islands, it winds through a full range of habitats – pinelands, hardwoods, wetlands, blackwater creeks and tributaries, deepwater runs, marsh, mudflats, estuary and shallows.  Each unique habitat sustains countless bird species, game and non-game wildlife, rare plants and an array of finfish and shellfish.

As a coastal river goes, it’s the total package.  Its diversity offers something for everyone.

Moreover, the Lockwoods Folly River is personal to diverse folks who understand its place in history and culture; love to explore its natural wonders; depend on it for their livelihoods; and work to protect its biodiversity for generations to come.

The river is central to the history of the region, says Danny Galloway, a third generation Varnamtown waterman.

“There would be no Varnamtown if it weren’t for the river. When it was settled in the 1800s, the river was the highway. There were no roads – the people depended on the river for transportation, their living and trade and commerce with the outside,” Galloway explains.

The Galloways, it turns out, are “newcomers” to the town.  It wasn’t until North Carolina mandated public education in the late 1800s that Galloway’s grandfather relocated the family from “across the river”  so his children could attend Varnamtown’s one-room school house.  By then, the Varnam and Dixon families already had established themselves as premier boat builders and watermen in the region.

“My grandfather and my father both made their living on the Lockwood – oysters, clams, shrimp and the whole spectrum of fisheries,” says Galloway.  His brothers still do some oystering.  But, his livelihood depends on shrimping offshore aboard his Varnam-built, 80-foot trawler, the Andrea Dawn.

What is not so certain, though, is the origin of the river’s name – which appears on a map dated as early as 1671. The most familiar story goes that a Mr. Lockwood built a big ship up the river. Unfortunately, it was too big to pass through the inlet to the ocean. Thus, Lockwood’s Folly.  A second version claims that Lockwood attempted to establish a colony by the river, but had to abandon the site because of “issues” with local Indians.  Hence, the Lockwood Folly.

A third version, according to The North Carolina Gazetteer, suggests that the name harkens to a time when landowners added “Folly” to the names of their manors – from the French word folie, meaning “delight.” Thus, Lockwood’s Folly would translate Lockwood’s Delight.

The quandary is reflected in personal references to the river as well as spelling variations on road signs at certain river crossings.  Diversity aside, a recent trend seems to lean toward Lockwoods Folly River as the quasi-official name.

But if you asked Emma Thomas, she might tell you that Lockwood’s Delight is a fitting title, given the river’s natural wonders.  Thomas says she is lucky to have turned her passion for the coastal environment into an ecotourism venture.  As the owner-operator-guide for The Adventure Kayak Company in Southport, she paddles the Lockwoods Folly River for both business and pleasure.

The river is tidal, she warns. So, it’s best to launch with the incoming high tide for a less strenuous journey.  From a public boat launch at Varnamtown, it’s about a 12-mile trip upriver to the N.C. 211 Bridge, close to Ocean Highway.

And, prepare to be amazed. “Kayaking offers an opportunity to embrace nature and the most incredible scenery along the way.  Near Varnamtown, the mudflats provide habitat for shellfish and the marshes provide nursery grounds for a host of finfish,” she says. “You see a lot of critters – from fiddler crabs scurrying in the mud to dolphins bobbing for fish in the bay. Pelicans and osprey swoop in for a share of the seafood buffet.”

Paddlers follow the deepwater route that once carried goods from downriver to landings near current-day N.C.  211. Today, the upper portion of the river serves as a safe harbor for commercial fishing vessels when hurricanes threaten to batter the coast.

But for paddlers, the lure of the Lockwoods Folly River lies beyond the 211 bridge – where little development has disturbed the natural flow and processes of the river.

The river narrows and the surrounding habitat takes a decided turn.  Here, cypress trees – some said to be a 1,000 years old – rise above the black water flow.  Beavers, otters, deer, water fowl, wading birds and song birds are abundant.

“It’s not unusual to see crowned night heron and even wood storks in this stretch,” Thomas says.
“And, yes, it’s a good idea to keep a watchful eye for alligators.  I spotted one that was at least 13 feet long – no tall tale.”

Thomas says she also meets the nicest people on the river – some ready to share a tall tale or two.  “An oldtimer in Varnamtown once told me that he remembers a time when the tide was so high, the sharks were eating his collards,” she recalls.

The people in places like Varnamtown and Sunset Harbor are an important part of living history.  They share a mutual love and respect for the Lockwoods Folly River.

“My mission is to get more people out into this unique environment so they become partners in protecting the river and a way of life,” Thomas says.

Tuesday:The communities and commerce of the river

Pam Smith cut her journalism teeth 30 years ago working for community newspapers in North Carolina. She honed her science-writing skills at N.C. State University's News Services before joining the communications team at North Carolina Sea Grant. There, she wrote about a full range of coastal topics for "Coastwatch" magazine. Since retiring to Brunswick County in 2005, she continues to contribute articles to the magazine about the Southeast coastal region.