RALEIGH — The term “red tape” has its origins in the centuries old practice of tying up legal documents in red ribbon. For just about as long, “cutting through red tape” has been synonymous with overcoming burdensome rules and bureaucracy.

But one person’s burden is often another’s protection, and as much as the cutting through analogy makes it sound easy, striking the balance between the two is an increasingly complicated process. North Carolina’s recent push to “reform” its regulations and rule-making processes is proving especially so.

Still, with initiatives by both the administrative and legislative branches in full swing, the state is poised for sweeping changes in how it approaches regulation, especially its environmental protections. These changes, driven by legislation passed last year, have yet to have a major impact on coastal rules but in the long run have the potential to significantly reshape current policies.

A Bit of History

During last year’s debate on the state budget, there was considerable outcry over a provision that would have limited state environmental protections to federal standards. Opponents said the change would take us back to the days of the Hardison Amendments, a reference to state senator Harold “Bull” Hardison, a Lenoir County Democrat, who in the 1970s and ‘80s championed a series of amendments to limit state air and water quality protections to federal standards. Hardison and his supporters, including then state senator and future hog magnate Wendell Murphy, managed to hold sway until the amendments were repealed in 1991ushering in an era that saw the passage of key water quality and hazardous waste rules along with tougher air emission standards.

As the state adopted more rules as a result of policy initiatives and tightening federal requirements, the businesses, farmers and landowners pressed their case that the myriad of regulations were growing too complicated and too burdensome. In the past few years, as the economy slumped that argument began to win over a more policy makers and more voters.

In October 2010, Gov. Beverly Perdue launched an initiative to eliminate “outdated, unnecessary or vague” rules, improve rule-writing procedures and strengthen the review process for new rules. It covered every state entity that writes rules — from the Board of Cosmetology to the Coastal Resources Commission.

The following month’s legislative elections assured that when the N.C. General Assembly convened again both House and Senate would be in Republican hands and many of the people who had campaigned on a staunchly anti-regulation platform would ascend to leadership roles.

What the new GOP leadership termed “regulatory reform” was one of the first big initiatives of the new session. In a series of public hearings around the state early in the session it became clear that their desire to rewrite rules and regulations was on a fast track. 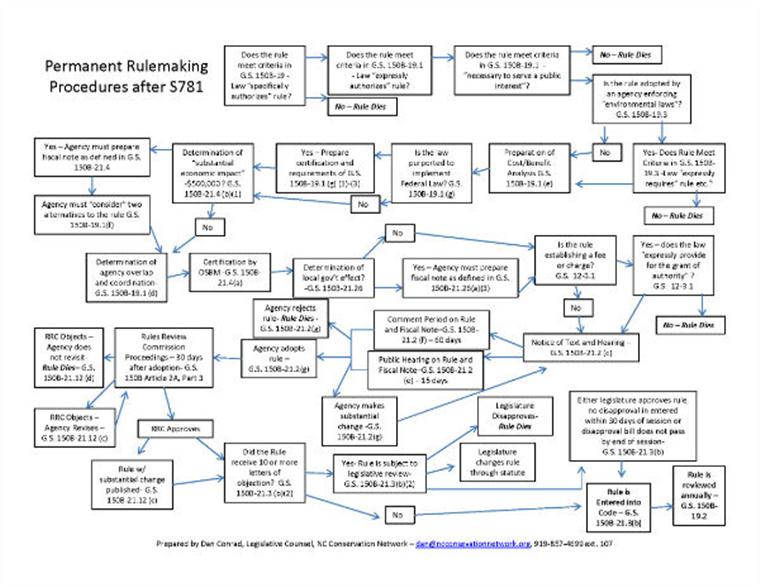 Dan Conrad of the N.C. Conservation Network outlined the path new rules must follow after passage of Senate Bill 781.

So as shocking as it was to many environmentalists that the budget included a provision that essentially rewrote the Hardison amendments into law, it wasn’t all that much of a surprise. And after both chambers voted to override Perdue’s veto of the budget, the provision temporarily became law.

Temporarily, because it was quickly repealed as part of Senate Bill 781, a much more comprehensive and complicated reform package. The bulk of the new bill, officially titled “An Act to Increase Regulatory Efficiency in Order to Balance Job Creation and Environmental Protection,” took effect on October 1and lays out the steps for revamping how rules and regulations are written.  Overseeing its implementation is the Joint Regulatory Reform Committee.

Like Perdue’s executive order, the bill tightens rule-making procedures and mandates a comprehensive review of rules in order to ferret out redundancy and inconsistencies. Unlike Perdue’s effort, the legislature required much more extensive studies of the cost of new rules to businesses, including an analysis of possible alternatives.

By October 1, each of these were required to provide the new regulatory committee with a list of all permanent rules designating whether they were mandated by a federal regulation, analogous to one or neither.

When DENR’s 122-page report was released last fall it set off alarm bells among environmental advocates, who saw it as an indication of what protections might be at risk if the legislature were to start stripping out state-specific standards.

Sam Pearsall, director of the Southeast Land, Water and Wildlife Program for the Environmental Defense Fund, said at the time he was worried the document would become a kind of Christmas list for those legislators bent on jettisoning as many rules as possible.

“Everything is on the table,” he said.