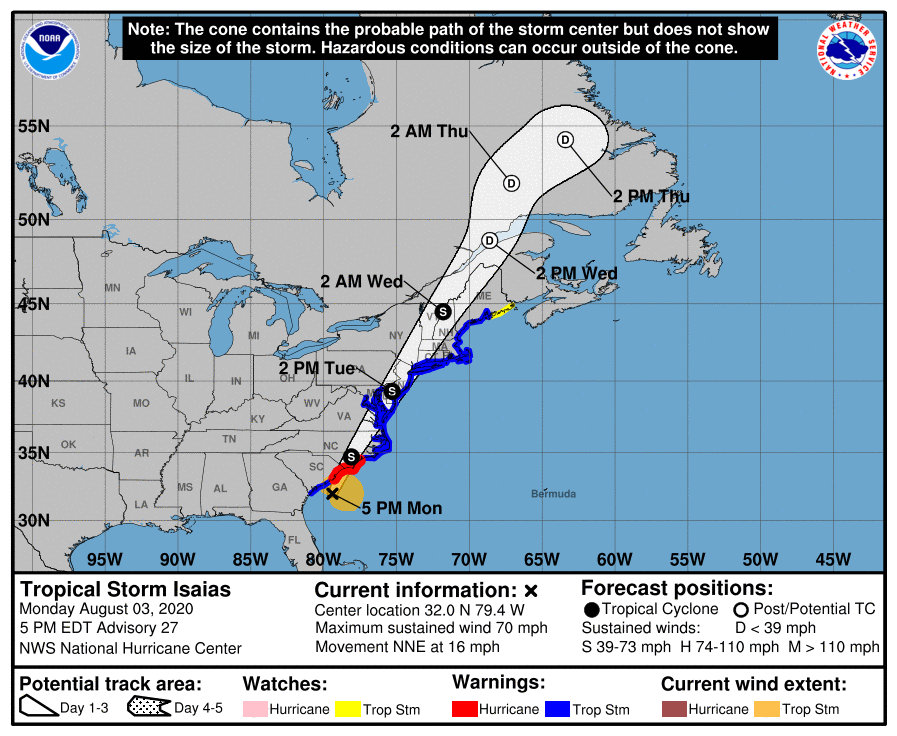 As Isaias closes in, expect an increase in intensity and there’s a potential for dangerous hurricane force winds, as it makes its way toward landfall later Monday night, Gov. Roy Cooper said during a briefing Monday afternoon.

“That means we must be on high alert. This storm will bring dangerous weather conditions to much of our state overnight. Heavy rains flash floods and storm surge can quickly inundate low lying areas. Stay inside during the heavy winds and watch for tornadoes,” he said.

As of 5 p.m. Monday, Tropical Storm Isaias was located at 32 degrees north and 79.4 degrees west, about 120 miles south-southwest of Myrtle Beach, South Carolina, and is moving at 16 mph. Central minimum pressure was 993 millibars with maximum sustained winds of 70 mph, according to the 5 p.m. advisory of the National Weather Service.

Isaias is getting better organized and expected to make landfall Monday night as a hurricane with dangerous winds and storm surge, strong winds and heavy rainfall likely from the eastern Carolinas to the mid-Atlantic Coast Monday night and Tuesday,the advisory continues.

“Pay attention to these warnings and secure your home and belongings,” he said. “Have a way to stay informed, particularly since the storm will sweep through at night.”

The status or category of the storm can be misleading, he cautioned. “Whether it’s labeled a tropical storm or a hurricane, you should take this storm seriously, and make sure your family is ready. And that means taking care of your pets, too.”

The storm threatens the coastline with storm surge and damaging winds, but inland areas are also at risk.

“Be prepared for a lot of rain, as much as 7 inches in some places,” Cooper continued. “The rain combined with high winds can lead to flooding, downed trees and downed power lines.”

“As little as 18 inches can sweep a car away. We’ve lost too many lives after the storms, because of people trying to drive through,” he said.

Cooper urged residents to listen to local officials and follow any evacuation orders when they’re issued.

“If you’re told to evacuate, the most important thing to do is get out of the danger zone. First plan to stay with family or friends and if that doesn’t work, a hotel is the next option if you can afford it,” he said. Shelters will be available for those who need them. Cooper said to visit your county website or call 211 for instructions on sheltering options. Shelters will screen people for coronavirus symptoms.

Emergency Management Director Mike Sprayberry said that preparations for the storm’s arrival, which will occur Monday evening, had been finalized.

“North Carolina residents should have completed their personal preparations as well. If you’re still making last-minute preparations, visit readync.org for guidance on personal preparedness, as well as defined current shelter locations,” he said. “We continue to coordinate closely with our counties, as they make final preparations for the storms arrival, and to support any resource needs.”

Sprayberry urged residents to be prepared for power outages and the possibility of flooding.

“This will be true for areas along the coast, as well as inland. Along the coast, storm surge will be a significant threat, particularly in Brunswick and New Hanover counties,” he said, adding that power companies are expecting widespread power outages, and have crews ready to begin restoration as soon as the storm passes.

As of 2 p.m. Monday, Tropical Storm Isaias was located at 31.2 degrees north and 80.0 degrees west, about 180 miles south-southwest of Myrtle Beach, South Carolina, and is moving at 13 mph. Central minimum pressure was 993 millibars with maximum sustained winds of 70 mph.

Storm surge could reach  3 to 5 feet in the Cape Fear area, and 2 to 4 feet from Cape Fear to the North Carolina and Virginia border, including Pamlico and Albemarle sounds,  and Neuse and Pamlico rivers. The Carolinas and the Mid-Atlantic will see from 3 to 6 inches of rainfall, at most 8 inches in some areas.

TROPICAL UPDATE: At 2pm EDT, NOAA’s #GOES16 is watching the clouds and #lightning of #TropicalStormIsaias. @NHC_Atlantic still expects it to become a hurricane before landfall tonight. #TropicalStorm, #StormSurge, and #Hurricane Warnings are all in effect. https://t.co/VTAp4gGkHs pic.twitter.com/Lj2zAalhrT

Isaias is forecast to make landfall as a hurricane Monday night and expected to bring strong winds and heavy rainfall from the eastern Carolinas to the mid-Atlantic coast through Tuesday, per the 11 a.m. Monday National Weather Service update.

As of 11 a.m. Monday, Tropical Storm Isaias was located at 30.7 degrees north and 80.1 degrees west, about 220 miles south-southwest of Myrtle Beach, South Carolina, and is moving at 13 mph. Central minimum pressure was 998 millibars with maximum sustained winds of 70 mph.

Since the 8 a.m. Monday update, a storm surge warning has been issued for parts of the Pamlico and Albemarle sounds, including the Neuse and Pamlico rivers, and for the North Carolina Outer Banks form Oregon Inlet to the North Carolina and Virginia border.

The weather service reports that on the forecast track, the center of Isaias will pass well east of the Georgia coast through this afternoon. “The center of Isaias will then approach the coasts of northeastern South Carolina and southern North Carolina within the hurricane warning area this evening. The center will then move inland over eastern North Carolina tonight, and move along the coast of the mid-Atlantic states on Tuesday and into the northeastern United States Tuesday night,” the 11 a.m. advisory continues.

Craven County Emergency Management will open at 6 p.m. Monday for citizens living in low-lying areas prone to flooding with no other option shelters at Havelock High School in Havelock, Ben D. Quinn Elementary in New Bern, Vanceboro Farm Life Elementary in Vanceboro. Shelters will close at 8 a.m. Tuesday if conditions allow. Emergency shelters will have limited capacity due to COVID-19 so they are only to be used by those who have nowhere else to safely shelter during the storm.

Brunswick County opened at noon Monday shelters at Cedar Grove Middle School in Supply and Town Creek Middle School in Winnabow. Social distancing will reduce the capacity at shelters this year due to the COVID-19 pandemic. Shelters should be only considered as a last resort. Officials are encouraging those that need to evacuate to reach out to family or friends or locate a more inland location.

Starting at 8 a.m. Monday, ferry routes between Southport and Fort Fisher, Cedar Island and Ocracoke, Swan Quarter and Ocracoke, and Hatteras and Ocracoke are offline due to weather and Currituck and Knotts Island route is suspended, according to the state Department of Transportation’s ferry division. Cherry Branch and Minnesott Beach and Bayview and Aurora are on schedule until conditions deteriorate.

Voluntary evacuation for Caswell Beach is ordered for all nonresidents, including renters, vacationers and guests went into effect at 8 a.m. Monday.

Oak Island has a voluntary evacuation order for all nonresidents, including renters, vacationers and guests effective 6 p.m. Sunday.

A tropical storm warning is in effect for all of eastern North Carolina as Isaias makes its way up the East Coast.

As of 8 a.m. Monday, Tropical Storm Isaias was located at 30.2 degrees north and 80.1 degrees west, about 250 miles south-southwest of Myrtle Beach, South Carolina, and is moving at 13 mph. Central minimum pressure was 994 millibars with maximum sustained winds of 70 mph.

Life-threatening storm surge is possible from Cape Fear to Duck. Isaias is forecast to regain hurricane strength before it reaches the coast of northeastern South Carolina and southern North Carolina, and hurricane conditions are expected Monday evening in the areas with a hurricane warning, according to the National Weather Service.

Forecasters with the National Weather Service’s Newport office continue to stress that there is a high risk for rip currents through mid-week and the increased threat for tornadoes, which can while residents are sleeping Monday night.

“The most likely time of arrival for tropical storm force winds is tonight, so again if folks have not made their preparations they need to do so now because we expect the winds to pick up through today and really peak tonight,” Erik Heden, warning coordination meteorologist at the Newport office said during a briefing Monday morning.

The good news, he continued, is that the storm is fast moving and should be in and out of the area Monday night and early Tuesday morning. “So our window for rain and surge and tornadoes is small but it will be intense for some hours tonight. But luckily, we’ll see improving weather during the day tomorrow.”

There is the potential for strong, tropical storm force winds across all of eastern North Carolina that could cause downed trees and power outages anywhere in Eastern North Carolina, with higher winds along and west of N.C. 17, according to the latest briefing Monday morning from the Newport office.

“Isaias is a real good example that a tropical cyclone, whether it’s a tropical storm or hurricane, (there’s) not a huge difference,” Heden explained, adding that the coast is seeing the impacts already, such as rip currents, and will see Monday night with wind surge, rainfall and the threat for tornadoes. “One important thing to remember, If it’s a tropical storm or hurricane, our impacts have not really changed so do not let your guard down.”

Heden said they expect less than or up to an inch of total rainfall across the Outer Banks and Crystal Coast, and 2 to 4 inches further inland, with some areas up to 6 inches.

There is a storm surge watch in effect south of Duck, including Pamlico, Pungo, Bay and Neuse rivers, which are adjacent to the Pamlico Sound, the Monday morning briefing stated. A storm surge watch means that life-threatening indunduation of greater than 3 feet above normally dry ground is possible.

There’s the potential for ocean overwash on N.C. 12 on the Outer Banks around high tide.  Oceanside areas that may experience the highest impacts of storm surge are the Crystal Coast, Outer Banks from Rodanthe south through Cape Lookout, the Neuse, Pamlico and Pungo rivers and the Pamlico Sound especially north of Pea Island near locations such as Manteo, Kitty Hawk.