The imprint on the Gulf Coast of the Deepwater Horizon oil spill that took place 10 years ago Monday serves as a warning of the potential dangers caused by offshore drilling.

When the oil drilling rig Deepwater Horizon in the Macondo Prospect in the Gulf of Mexico exploded and sank April 20, 2010, 11 workers died and 4 million barrels of oil flowed into the gulf over an 87-day period before being capped July 15, 2010, according to the Environmental Protection Agency.

White Oak-New Riverkeeper Alliance Advocacy Coordinator and Crystal Coast Waterkeeper Larry Baldwin told Coastal Review Online that the 10-year anniversary of the Deepwater Horizon is certainly not a day of celebration like many anniversaries.

“It should instead be a reminder of the tragedy to 11 men, God rest their souls, and also the ongoing impacts from this disaster … a disaster that should never have occurred,” he said.

“Ten years ago, we watched the largest oil disaster in U.S. history unfold in the Gulf of Mexico. A decade later, offshore drilling remains as dirty and dangerous as ever,” Randy Sturgill, senior campaign organizer for Oceana, told Coastal Review Online.

“Instead of learning from the 2010 disaster, President Trump announced a blanket expansion on offshore drilling. The administration is actively working to open North Carolina’s coastline to risky drilling operations while dismantling the few protections put in place as a result of Deepwater Horizon. Taken together, it’s another catastrophe waiting to happen,” he continued.

In January 2018, the Trump administration announced its National Outer Continental Shelf Oil and Gas Leasing Program (National OCS Program) for 2019-2024, proposing to open up 90% of the total OCS acreage and “more than 98% of undiscovered, technically recoverable oil and gas resources in federal offshore areas available to consider for future exploration and development,” according to the White House. The plan was put on hold in April 2019.

Tom Kies, president of both the Carteret County Chamber of Commerce and the Business Alliance for Protecting the Atlantic Coast, said in an interview that every single municipality here on the North Carolina coast publicly opposes offshore oil drilling and seismic testing.

“Every time we hear about the current administration’s efforts to open the Atlantic coast to offshore oil drilling and seismic testing, we recall images of Deepwater Horizon and the horrifying effects of that disaster,” he said. “It’s bad for tourism, it’s bad for commercial and recreational fishing, and it’s bad for business.”

Researchers are finding evidence that the spill reaches farther than previously thought and the Gulf Coast is continuing to feel the impacts.

A study released earlier this year by the University of Miami Rosenstiel school of Marine and Atmospheric Science found the toxic and invisible oil spread well beyond the known satellite footprint of the Deepwater Horizon oil spill.

“The spill was only visible to satellites above a certain oil concentration at the surface leaving a portion unaccounted for.”

The finding published in Science Advances in February show that the spill reached the West Florida shelf, the Texas shores, the Florida Keys and along the Gulf Stream towards the East Florida shelf.

“We found that there was a substantial fraction of oil invisible to satellites and aerial imaging,” said the study’s lead author Igal Berenshtein, a postdoctoral researcher at the UM Rosenstiel School, in a statement. “The spill was only visible to satellites above a certain oil concentration at the surface leaving a portion unaccounted for.”

Claire Paris, senior author of the study and professor of ocean sciences at the UM Rosenstiel School, said in a news release that the results alter well-known ideas about the consequences of oil spills by showing that toxic and invisible oil can extend beyond the satellite footprint at potentially lethal and sublethal concentrations to a wide range of wildlife in the Gulf of Mexico.

A report released Tuesday by Oceana looks at the decade since “one of the worst environmental disasters in U.S. history.” The report studies the cause and impacts of the spill, both then and now, and whether the disaster changed the government and industry’s approach to offshore drilling.

Oceana reports that about 8.3 million oysters were killed, and certain populations of fish, shrimp and squid decreased by as much as 85% as a result of the spill. Additionally, up to 170,000 sea turtles were killed by the spill and 800,000 birds died. For five years, more than 75% of all dolphin pregnancies failed in the oiled area and the endangered Bryde’s whales, decreased by about 22%.

The Gulf Coast’s recreation industry as a whole lost more than $500 million, fisheries closed and the demand for Gulf seafood plummeted, costing the seafood industry nearly $1 billion, and housing markets across the region experienced a decline in prices between 4% and 8% that lasted for at least five years, according to the report.

Sturgill said that Oceana’s report shows how a chain of bad decisions and decades of poor safety culture laid the groundwork for the BP tragedy. “We cannot afford to repeat these mistakes. The current administration needs to protect North Carolina’s coast from a dangerous future of spilling and reverse course on all plans to expand offshore drilling.”

One organization has looked at how the North Carolina coast could be affected by expanding drilling offshore. 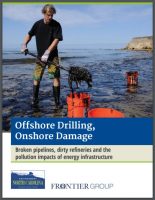 Among the concerns raised in the report were the pipelines that run from offshore rigs inland to processing facilities degrading estuary water quality and risk spilling oil, toxic waste polluting drinking water and land, and air pollution from oil refineries.

“We want to visit clean beaches, smell the ocean breeze, and admire the marine life off our coast — not avoid pipelines, choke on pollution from oil refineries, and contend with oil barges,” said Jean-Luc Duvall, campaign director for Environment North Carolina, in a news release. “Drilling off our coast may seem far removed from our homes and businesses, but the onshore infrastructure necessary for drilling creates a pressing threat to the health of our ecosystems and our citizens.”

Deepwater Horizon influenced then and continues to influence today how the Southern Environmental Law Center senior attorneys Catherine Wannamaker and Sierra Weaver shaped the strategies to protect the Atlantic Ocean.

“We learned just days after the spill, while oil was still flowing, that the government was going forward with lease sales, while it was still unable to control the spewing Macondo well,” Wannamaker, a senior SELC attorney, said last week in a news release.

“One of the things we learned working in the Gulf during the course of a spill is that it’s very difficult to stop offshore drilling in an area when it’s been established for 30 years,” Wannamaker added.

SELC and Defenders of Wildlife filed in 2010 the first federal lawsuit after the spill to pause drilling but hit roadblocks, the release states.

“We had always been focused on stopping new offshore drilling in the Atlantic,” Wannamaker said. “But when we worked in the Gulf, we realized just how hard it was to stop lease sales that had been on the books for years.”

That notion has shaped SELC’s legal defense of the Atlantic Ocean, Weaver said.

“This is our chance to save the Atlantic,” Weaver said. “We need to stop it before it starts. We need to make sure that these communities are never facing the type of damage and destruction that the Gulf of Mexico faced. That was enough of a tragedy. We need to learn lessons from that and not repeat it.”

SELC researcher Melissa Whaling in the last few months found that more than 25,000 jobs were lost because of the spill, along with $700 million in wages and in addition to the 11 deaths, tens of thousands of people have become ill or died from their work to clean up the spill. These numbers have encouraged 250 coastal communities and governors of all 14 Atlantic states to lodge official protests to the Trump administration’s efforts to open East Coast waters to petroleum companies, according to the release.

Something we have learned from the disaster, Baldwin said, is that the technology does not exist to safely drill for oil or respond to a tragedy of this magnitude.

“Industry and government are working together to ensure a more coordinated effort to prevent future spills and to respond more effectively if they occur.”

“We have learned that the destruction from an incident like Deepwater Horizon on the environment is severe and long-lasting. We have also learned that Big Oil and Big Government have no regard and take no responsibility for the destruction that took place, and continues to take place to this day,” he said.

Baldwin explained that he has friends who were on the front lines of covering the disaster when it happened, and are still witnessing the impacts.

The National Ocean Industries Association says it represents all facets of the domestic offshore energy and related industries. NOIA President Erik Milito told Coastal Review Online in response to questions about the 10th anniversary of Deepwater Horizon that nothing is more important to the industry than safety and environmental stewardship.

He said that the advancements of prevention, intervention and incident response capabilities by the offshore energy industry had been remarkable and that the industry had developed new safety equipment and improved safety procedures that are being adopted worldwide. He said more than 100 new or revised industry standards had been issued.

“Industry and government are working together to ensure a more coordinated effort to prevent future spills and to respond more effectively if they occur. Every type and size of company is completely dedicated to producing energy safely and in an environmentally-sustainable way,” he said. “Additionally, the widespread advancement of new technologies, like artificial intelligence and cloud computing, mean than not only are problems solved quickly and more efficiently, but the concerns are identified and solved before they have a chance to become a problem.”