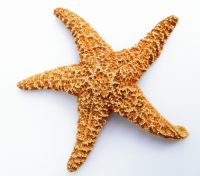 For marine bio nerds, this is kind of like a Ford-versus-Chevy argument, like Land Rover versus Land Cruiser, or vinegar versus no vinegar on your barbecue. Actually, that last bit about barbecue is not up for discussion. This is eastern North Carolina, to suggest that anything other than vinegar, cold slaw and hot sauce belongs on our pulled pork would solicit a mob of angry villagers storming your house in the night with pitchforks and torches in hand.

Somehow, the debate over what to call these iconic little echinoderms surfaces in my world on at least an annual basis. I’m not so sure as to what this says about the company that I keep. Given all the things happening in the world of politics and science and pseudoscience that can be argued these days, it seems almost trivial, dare I say pedantic, to get sucked into the “sea star” versus “starfish” debate. And yet, I just can’t help myself.

I’m not going to beat around the bush here. If we were being completely honest with ourselves, neither starfish or sea star would be the real name of our five-legged friends – though not all of them actually have five legs and some have as many as 40. Technically speaking, scientifically speaking, we should probably just look toward the name that their class was given in 1830 by the French zoologist Henri Marie Ducrotay de Blainville. Studying the shape and form of various starfish, Ducrotay brought together the Greek “aster” and “eidos” in the classical manner of giving animals a descriptive name from ancient languages. “Aster” simply means “star,” which, it would seem, everyone has picked up on already. “Eidos,” on the other hand, means “form” or “essence” or was used to suggest similarity. When combined, “aster” and “eidos” mean “star-like,” and the class of echinoderms that starfish reside in is the Asteroidea. Thus, starfish are really asteroids! Problem solved. Everyone is wrong.

But as much as I would love for the name asteroid to catch on, I hear it’s already taken. I can understand not wanting to confuse people any more than they already are. Just think about it: In the chance of an extinction-level event from space, we wouldn’t want the public thinking that a giant starfish was hurtling toward Earth. Although, that could be scarier.

So, I digress. Asteroid is off the table. Though technically correct, we must leave this title to rocks and ice floating around in space. But if not asteroid, then what? This just brings us back to the original question at hand, and for this it may be best to turn toward history.

Anytime we get into the historical use of words, we risk wading into murky waters. Language is alive. It changes. It grows, evolves. Meanings drift over time. Take the word “fish,” for instance. Today, we have a very well-defined definition of the word “fish.” Consulting with Lord Google on the matter will bring up a variety of definitions as to what a “fish” is, but at the heart of it all is a cold-blooded vertebrate with gills and fins and a two-chambered heart. But this is a purely modern-day understanding of the word. If we go back to the 16th century, for instance, the word “fish” simply meant any animal that only lived in water. In this understanding of the word, whales and dolphins were both fish and so were crabs, for that matter. So, a starfish was simply a star-like animal that lived only in the water.

The earliest documentation of the word “starfish” that I could find is from 1538 in the Oxford English Dictionary. Really, it’s the word “starfyshe.” If the word made it into the dictionary by the early 16th century, this means that “starfyshe,” had been part of the common vernacular for a long time.

When we look into the origin of the name “sea star,” however, we find that the earliest definition in the English-speaking world was actually a star that guides mariners at sea. Fair enough. I can get down with celestial navigation. But it’s not that simple. Just 30 years after our “starfyshe” appeared in the Oxford English Dictionary, Edward Fenton, an English sea captain, translated the French Pierre Boaistuau’s immensely popular “Histoires Prodigieuses.” in to his native tongue. “Histoires Prodigieuses” was collection of stories and common-knowledge explanations of the natural world. Though that’s really the polite way of saying it. A more accurate explanation is that it was a collection of myths and stories that surrounded the freaks of nature, which, it would seem, all echinoderms qualified as freaks of nature at the time. Thus in 1569, the phrase “sea starre” enters the English version of this conversation “bycause it hath the figure of a painted starre.”

The fact that “sea starre” first entered the English vernacular thanks to the translation of a French book says a lot about the two terms. You see, “starfish,” it turns out, is a distinctly English word. The rest of Western civilization, from Germany to France to Spain, called these things sea stars. At least, that’s how their names translate.

In America, use of the word “starfish” ultimately betrays our English roots. I find this funny. After the Revolution, America entered into a phase of cultural anxiety. Read: identity crisis. We had fought for and won our freedom from England, and in every way possible we tried to cast off our artistic, literary and even scientific ties to the Old World. However, language persisted, such as “starfish” and “buffalo” and “antelope.” But hey, there are far greater ironies in American culture than something as trivial as this really – such as the fact that we celebrate our independence from an empire by reveling in the fruits of that empire: Chinese-invented fireworks.

Come the 1990s, a bandwagon rolled into town telling us all that we were wrong to use the term “starfish.” All the cool kids in Europe were saying “sea star.” We needed to get with the program. Starfish were not fish, they said. We were using the word incorrectly. We were confusing people. Maybe this was why countries from Vietnam to Estonia far outranked our own students in their knowledge of science, according to the Pew Research Foundation. It’s all the starfish’s fault, right? Oh, the power of language!

But, jellyfish are not fish. And sea urchins are not really poor street kids that live in the sea. What about crayfish? Horseshoe crabs? Sea cucumbers? Brain Coral isn’t really made of brains. Flying lemurs are not really lemurs and they certainly do not fly. And if we are really going to ride this train, it can also be pointed out that the name “sea star” is also incorrect, given that they are not actually stars.

Furthermore, to argue that the proper term for these echinoderms is “sea star” ultimately invalidates much of the rest of the world. Though we like to think we are special, Europe and it’s political offspring like the U.S. are just a small group of countries with very big egos. In Japan, for instance, they are called “hitode,” meaning “palm.” In Malay, they were known as “tapak sulaiman,” or “Solomon’s footprint.” And the Korean word, which I can’t type because I don’t know how to create all the cool symbols on my keyboard, means “immortality.”

“Starfish,” “sea star,” “seastar” or “Solomon’s footprint” – call them what you will. All are correct. And yet, none of them are correct.

Really, they are asteroids: star-like.

Jared Lloyd is a professional wildlife photographer and nature writer. Growing up on the Outer Banks, Jared has spent much of his life exploring the barrier islands, pine savannahs, black water swamps and sounds of North Carolina. These days his photography and writing carry him all over the world from Africa to the Amazon, the Galapagos to Yellowstone, but the lure of the salt life along the coast keeps bringing him back to North Carolina.