EMERALD ISLE – This Bogue Banks town won’t hear until late summer whether it will get grants to purchase a nearly 30-acre tract behind the town recreation center for a nature preserve and athletic fields, but scattered opposition and a recent report by the North Carolina Natural Heritage Program have some officials wondering about the future of the effort.

Related: Will Park Plan Save or Ruin Maritime Forest?
The town’s plan is to use grants from the state Parks and Recreation Trust Fund and Clean Water Management Trust Fund, plus $455,000 from town coffers, to buy the $3 million piece of land, which is mostly maritime forest. About 20 acres would be preserved in its natural state for passive recreational use, but the remaining nine to 10 acres would be reserved for future use as athletic fields or other more active park uses.

But when Mike Schafale of the Natural Heritage Program inspected the property in April in response to the clean water grant application from the town, he wrote that, “The town’s proposal to retain nine acres of the tract for recreational development would … be a serious threat to the natural integrity of the site, given the small size of the site.

“Though development in the wetlands would be unacceptable, and protection of them is needed to protect the creek, the most significant feature of the site is the maritime forest,” Schafale added. “At 23 acres, it is a small example, but it is one of the few last remnants of the extensive forest that once covered the interior of Emerald Isle, and is one of the better remnants in this region of the coast.”

Development of nine acres for recreation would be a “serious loss,” according to Schafale’s report, and if development were to occur in the middle of the site, “it would destroy virtually all of its ecological value.”

The report encourages the town to use the land as a natural recreation area, with trails and small parking lots, but without clearing large areas of the maritime forest or wetlands.

Town Manager Frank Rush said that if the town isn’t able to use the land for anything except passive recreation, he’s not sure it’s worth it.

“In a nutshell, it is ultimately up to our board of commissioners, but I am not sure if the town is willing to spend $400,000 to $500,000 on the land purchase if there’s no ability to use it for any purpose other than preservation and trails in the future,” the manager said in an email. “That’s a lot of money for Emerald Isle. We have many other demands for those funds, and the town already has a much nicer and larger natural area (nearly 40 acres) at Emerald Isle Woods Park, directly on Bogue Sound.”

Rush said the town views the potential purchase of the Surfside Realty Tract as an opportunity to provide athletic fields and other active recreation amenities, after a public planning process, while preserving two-thirds of the undeveloped parcel.

Rush said the parcel is the only one in Emerald Isle that can accommodate any sort of athletic fields.

“There are currently nearly 500 school-age kids in Emerald Isle, in addition to many more young and active people in their 20s, 30s, 40s, and beyond, who would benefit from these kinds of facilities, and we expect more in the future as technology changes and more people are able to work remotely and live in a place like Emerald Isle.” 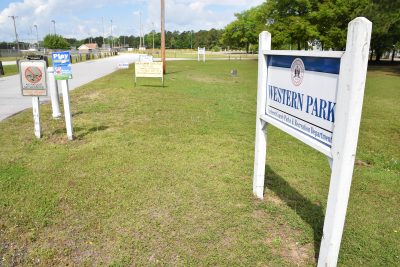 County-maintained athletic fields are available just across the bridge at Western Park in Cape Carteret. But the town, Rush said, wants to be “a complete community that offers these kinds of traditional recreation amenities and opportunities.  It’s all part of the overall package that will help to make Emerald Isle an even better place than it already is.”

While Rush remains optimistic about the grants, two commissioners interviewed this week agreed with him about the ball field issue and the idea that conserving most of the forest is better than nothing, especially given the eventual likelihood of multifamily development.

“I don’t think there’s that much interest in doing this if there is not a good possibility of athletic fields,” said Commissioner Jim Normile. Even with grants, he said, “there’s still a very large commitment of taxpayer funds.”

If taxpayers are to make that kind of financial contribution to the purchase, he said, it’s reasonable for them to expect something other than the trails and other passive recreation opportunities that already exist in Emerald Isle Woods.

Commissioner Candace Dooley said that “People might think there aren’t many kids in Emerald Isle, but there are, and many of them are involved in sports and athletics.”

Emerald Isle, she said, “wants to maintain a family atmosphere,” and in most places, athletic fields are part of that.

“I agree that without that (reservation for ball fields), it doesn’t make much sense for the town to ask taxpayers to commit that kind of money,” she said.

Town commissioners, during their monthly meeting on April 11, voted unanimously to seek the two grants and money from the Marine Corps, augmented by the tax money, to buy the property.

The land is was platted for a subdivision way back in 1989, but it was never built.

Some area environmentalists have expressed concern about the plan. It’s the largest maritime forest tract in town, other than Emerald Isle Woods, and serves as habitat for painted buntings.

In addition to state grants, officials also are seeking $1.5 million from the federal government through Marine Corps Air Station Cherry Point. That request, Rush said, is feasible because the property is in the flight path for aircraft that use Bogue Field, an auxiliary landing strip across Bogue Sound in the town of Bogue. The military discourages development within the flight paths of its facilities, and often partners with local governments to minimize it.

Nate Halubka, manager of grants and outreach for the state parks and recreation fund, said this week that, at least for “acquisition grants,” his office isn’t concerned about how the land is used.

“We expect that the applicant will tell us what they expect it to be used for in the next five years, but that can change, and we know that,” Halubka said. “If the town says, for example, that they are going to put in ball fields, and that changes,” that doesn’t affect whether the town should get an acquisition grant.

“Public recreational use is our concern, whether it’s passive or active,” Halubka said. “It’s up to the town’s discretion to decide how it should serve the needs of the public.”

In other words, he said, if it’s ball fields, that’s fine. If it’s trails, that’s fine, too. And if it’s a combination, that’s also fine. The office funds all kinds of land-acquisition projects.

LuAnn Bryan, the Parks and Recreation Trust Fund recreational resources service coordinator for the state’s eastern region, said she believes her office will have about $5 million available for grants this year, and Halubka agreed.

“Of course, that all depends on what the legislature does, but they’ve been good to us in the past,” he said.

Walter Clark, executive director of the Clean Water Management Trust Fund, said he hasn’t seen the property, having only moved into his new position a couple of months ago, after heading the nonprofit Blue Ridge Conservancy in Boone. But he also spent more than two decades as North Carolina Sea Grant’s coastal law, planning and policy specialist, so he knows coastal issues and concerns.

He saw Schafale’s report and called it “interesting,” and said it will play some role in the grant decision, but he’s not sure how much.

The clean water fund has 90 land-acquisition applications on its table, Clark said, and uses a “scoring” system to rank them. The final decisions are up to the fund’s nine-member board of trustees, and he said hasn’t been around long enough yet to have a “crystal ball” that would give him any indication of their leanings.

He added that the trustees will also factor public input – letters and other communications – into the decision.

In action at the April 11 meeting, the Emerald Isle board authorized Rush to execute a contract for purchase and set up a “due diligence period” that could result in a closing of the deal at the end of October.

Cherry Point officials have initiated the internal federal process to secure the money, Rush said, but it’s a process that likely will take several months.

Based on discussions with officials at Cherry Point, Rush said he expects a definitive commitment by September, but the money might not be available for a few months after that. The state grant decisions could also come by early September.

If the state grants come through, but actual cash from the military is not available by the planned Oct. 31 closing date, Rush added, the town could enter into a short-term financing arrangement with The Conservation Fund of North Carolina.

The Conservation Fund of North Carolina is part of a national organization whose mission is to assist communities in the acquisition and conservation of public land, and they are serving as the town’s partner on the acquisition. Under the military’s program, Rush said, MCAS Cherry Point can provide federal funding only to previously authorized partners, and The Conservation Fund has been involved in similar previous deals with Cherry Point.

In his memo to the board, Rush noted that if the town does not receive enough money for the purchase, “it will likely be possible to have The Conservation Fund proceed with the acquisition on the town’s behalf. The Conservation Fund would provide the balance of funding necessary to acquire the property, and would then hold the property for some mutually agreeable time period.”

The other option is to simply abandon the effort, he added.

Rush said that if the town can get the land, nothing would happen fast.

“Ultimately, I would envision the board soliciting additional public input on desired park amenities in the future, and using that public input to develop a specific park plan,” he said.