RALEIGH — Each week, Anastasia Figurskey hides 15 plastic cups filled with water in bushes near spots around Wake County where people will walk by: Gas stations, front yards of home and recycling drop-off centers all fit the bill.

After a few days the Wake County employee fishes brown paper marked with tiny black dots from each cup. After the paper dries, inside a windowless insect-hatching room at North Carolina State University, she peers at every egg under a microscope.

Hard to see with the unaided eye, mosquito eggs pop into view when magnified. The shape of the eggs tells Firgurskey their likely species, which she notes with entries to a paper log.

“You get better at it,” the young woman says, clearly relieved.

So it will go, dot by dot in 15 North Carolina counties from now into the fall, until the state starts to assemble a better map of the location and population size of mosquitoes capable of transmitting Zika virus.

North Carolina today is not a place where biting mosquito are infecting people with Zika, the virus linked to heartbreaking birth defects in Brazil.

People here are at greatest risk if they travel to locales where the virus is spreading or have sex with a man who has been to such a place. As of mid-July, only 19 people had been diagnosed with Zika in North Carolina, all due to travel-related exposures.

But in case the number of infections rises, public health officials want to know what parts of the state host the largest number of potential Zika vectors to help them target their prevention efforts.

To get up to date, the state Department of Health and Human Resources, in step with federal recommendations, is spending $50,000 for the survey that university scientists Michael Reiskind at North Carolina State, Stephanie Richards at East Carolina and Brian Byrd at Western Carolina are leading. Public health staff in 15 counties, along with helpers on some military bases, go out into the field to set traps.

The locations and numbers of species capable of spreading Zika in North Carolina is fuzzy today due partly to the 2011 shuttering of state programs that had monitored disease-vector insects, Richards said.

“Little has been done to document species distribution across the state, other than the few functioning programs in eastern N.C. that regularly conduct mosquito surveillance,” she said.

Of keen interest today is the presence of Aedes aegypti, the primary transmitter of Zika in tropical areas. It has been detected in Chatham, Hoke, Scotland and Swain counties after 1995 but not in those counties since 2006, says research published in June. Brunswick County officials have seen the vector in their jurisdiction previously too. That doesn’t mean it’s not present today, however.

“We haven’t seen Aedes aegypti in many years in North Carolina. But is the reason we are not seeing them is that no one is looking?” asks Reiskind, the N.C. State specialist who researchers ways that ecology influences human disease risks.

The other mosquito species getting tracked is Aedes albopictus, known as the Asian tiger mosquito, well established in these parts. While a less efficient carrier of Zika than A. aegypti, recent research by Richards indicates local populations of Asian tigers could contract and transmit Zika virus in North Carolina. 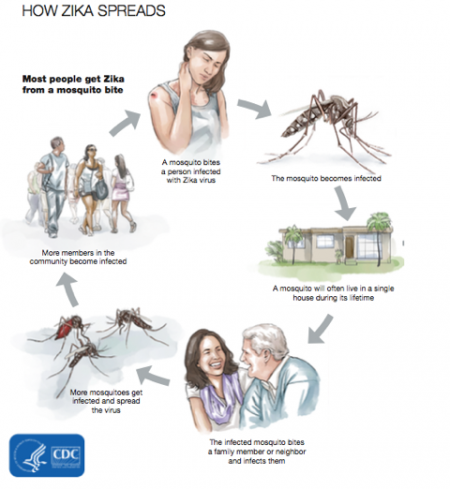 Mosquitoes infected with Zika transmit the virus when they bite people. More specifically, infected female mosquitoes share the virus in their saliva when slurping up the blood meals they require to nourish their developing eggs.

The web of transmission only expands from there. Men can infect both women and men with Zika during sex. Pregnant women, tragically, can infect their developing features.  People infected with Zika keep the cycle going when mosquitoes bite them. After that it doesn’t take long for the winged predators to spread it to more people.

Fortunately for those looking for species that can transmit Zika, such mosquitoes are relatively easy to find. They like to lay eggs in containers holding small amounts of water in areas close to people, their prey. That’s why Figurskey and other trap setters choose very specific spots to hide their black plastic stadium cups fitted with sturdy paper normally used to germinate plant seeds.

Richards, in addition to helping with survey, is assessing just how good or poor a vector local Asian tiger mosquitoes might be. Her preliminary study infected some A. albopictus mosquitoes collected in Greenville with a Zika virus isolate that was found circulating in Puerto Rico in 2015.

All mosquitoes developed Zika infections and in each case the virus escaped the insect’s’ midgut to reach their saliva, the launching pad for human infection during a blood meal. Only some of the mosquitoes could transmit the virus after a 14-day incubation, not by biting a person —  that would be too dangerous — but by dripping saliva into tubes holding sugar water and fetal cow blood in the laboratory.

“Much more research is needed to evaluate the vector competence of Aedes albopictus,” says Richards, who is seeking federal research funding to do that very thing. “It is certainly a potential vector as it blood feeds on humans, can transmit the virus and is ubiquitous in North Carolina.”

Winters in most of North Carolina is too harsh to sustain year-round populations of A. aegypti, the most successful carrier of Zika, Richards says. But since they, as well as A. albopictus, lay eggs in artificial containers, supplies of their eggs or larvae could be easily replenished here, arriving in shipments of tires or other products that store the small amounts of water needed to sustain mosquito eggs or larvae.

Jim Gardner, the vector control manager in Pitt County, is collecting eggs just like Figurskey is doing for the survey in Wake County. He’s grateful the state is investing once again surveillance of disease-carrying mosquitoes.

The information will be needed if incidence of Zika or some other mosquito-borne disease rises here. “No knowledge is ever wasted,” Gardner says.

This story is provided courtesy of N.C. Health News, a website covering health and environmental news in North Carolina. Coastal Review Online is partnering with N.C. Health News to provide readers with more environmental and lifestyle stories of interest about our coast. You can read other stories about health care here.

Catherine Clabby is a science journalist who has worked her craft in newspaper, magazine, and digital publishing. Senior editor of E.O. Wilson’s "Life on Earth" biology book series, she reports on environmental health issues for "North Carolina Health News."

Join the conversation on our Facebook Page
Previous Post: « Group to Get Grant to Build Oyster Reefs
Next Post: Maps Show Mammals in Seismic Testing Sites »