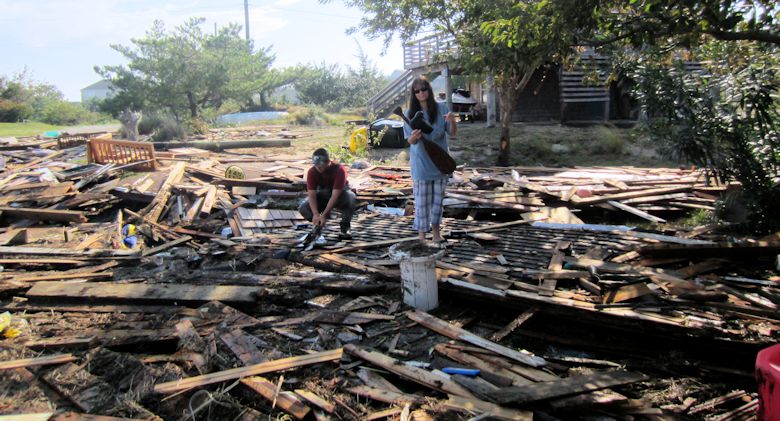 Hurricane Irene struck the N.C. coast a year ago today. Though it was considered a minor hurricane, Irene created havoc. It cut new inlets along the Outer Banks and triggered historic flooding in some coastal communities. It killed seven people, according to the Associated Press, and did at least $1.2 billion in damage. Many people along the coast are still trying to recover. We’ll run several stories this week that look back at one of the worst hurricanes to strike the coast in recent years.The first is a story of hope and perseverance. In stories Tuesday and Wednesday, a reporter for the Island Free Press on the Outer Banks looks back at the storm’s effects and people’s ongoing struggles to recover.

NAGS HEAD — The phone call came just after dawn, when daylight revealed the rubble that was once the iconic Stinson Ranch, a weathered survivor of 1900s Nags Head perched for decades on pilings in Roanoke Sound.

That’s when Stinson learned that the historic wooden cottage with its wraparound porch and shuttered windows that he coddled and cherished for nearly 50 years had been heaved off the pilings, swept onto the shore and pummeled into pieces by massive sound tide flooding from Hurricane Irene. The pine bead board, the cedar shakes and siding, the vintage furniture, the original artwork that hung on the walls of the century-old house, the logbook of generations of guests — all of it was now a mass of debris strewn onto the gravel road.

But now, a year later, Stinson is celebrating. Against the odds, reconstruction of his house began this month.  It will be located at the same spot in the sound. And judging by the model Stinson made based on the architect’s drawings, it will look as charming and quaint as before.

“We just believe that God walked this through,” Stinson said in a recent interview, relaxing on the screened porch of his Nags Head neighbor, the Roanoke Sound behind him sparkling in the afternoon sun.  “There were so many things that had to fall into place.”

No doubt the two biggest favors the heavens granted him were an emergency CAMA permit that allowed the reconstruction, and a generous, can-do builder.

When Stinson, a retired art teacher from Greenville, learned the wretched news, he rushed to the site that afternoon with his family. A photographer captured a mournful Stinson sitting on the remains of the cottage steps, surrounded by water, soothing his daughter Erin. The photograph reflected the quiet intensity of the family’s loss, and was reprinted in numerous news outlets worldwide.  It was later voted one of the best photographs of 2011.

Charley Pereira, owner of Beach Design & Construction and a nearby neighbor who recently restored his own historic Nags Head cottage, came by that day to offer support and ended up being the impetus to the resurrection.

“He said, ‘If you can get a CAMA permit, I can build it back for you,’” Stinson recalled. “He was like a guardian angel. We were hopeless. We were despondent to lose the place, with no possibility of standing on the porch again.”

With Pereira’s encouragement, Stinson launched into recovery mode. Friends helped him salvage whatever could be salvaged from the debris, creating a big pile of wood that was eventually put into storage. Since it was not the family’s primary house, there was no insurance compensation. So they set up a Web site  to gather public support and perched a hand-painted sign with the Web address on the ground in front of the old pilings.

Then Stinson made prints of his artwork of the house to sell online.  He painted miniatures of the house on a salvaged shingles to sell or to reward donors. A guitar player and singer-songwriter, he held concerts. He made a CD, “Brave Centurian,” to raise money. On it is the song, “Lift Me Up,” that he wrote in five minutes the day after the storm.

Stinson said he gets choked up every time he sings it.

“The words came out exactly as they are now,” he said. “It’s not surprising because I was so emotionally attached to the cottage. The cottage was saying to me, ‘Lift me up. And if you can’t . . .’”

Anyone who had been to the house can understand why the family loved it so much. To get to it, you had to walk on a rickety 55-foot-long wooden pier over water. The cozy interior had wooden bead board walls, a modest kitchen and narrow wood stairs that led to a big sleeping room. It smelled good, a blend of salt and seasoned wood.  Numerous windows, most with hinged shutters, framed views of crimson sunsets and welcomed summer breezes. A wide porch wrapped around three sides, and there was small dock attached to the porch by a walkway. The house swayed gently.  Everywhere you looked, there was sound and sky. The water could be heard rhythmically slapping against the pilings. Sometimes it splashed onto the porch. Wind was omnipresent, breezy or blustery. Birds flew close by, and flying fish leaped out of the water. Full moons and falling stars and lightning storms transformed the night sky into a natural theater screen.

Billy and his wife, Sandra, also a retired teacher, every year spent their summers and nearly every holiday at the house with their two daughters and their dogs, often joined by their extended family or friends. With no television or computer allowed on the premises, they’d play music and games, sing together, paint, read, write and tell stories. Every New Year’s they’d put notes in boats to symbolically let their troubles sail away. After the Stinsons retired and their children grew up, the house became even more of a centerpiece of their lives.

“It was alive,” Stinson said. “It had a personality. It sure did.”

Listed on the National Register of Historic Places in 2006 as the Markham-Albertson-Stinson Cottage, the house was built in 1916 on a narrow strip of land along Roanoke Sound. It was at the end of Soundside Road, where Outer Banks tourism began in the mid-19th century, and was one of the many vacation homes and resort hotels constructed there as a summer retreat for city folk.

In 1963, the Stinson family bought the house for $5,750. The year before, the Ash Wednesday Storm had taken out the first floor planks. The house was repaired and hoisted up on pilings. In a 2006 interview, Stinson recalled that the house was initially on land. But within no time, the beach under it started washing away. Before long, the house was standing by itself in the water.  Eventually, concrete chunks from the Old Nags Head Inn were used to make a rip-rap bulkhead, and the septic tank was moved to an easement.

Over the years, Stinson, 67, was constantly maintaining the house, which had about 1,100 square feet of living space and nearly as much porch, and he always secured it before bad weather events.

It proved to be resilient and toughed out many a storm.  Until Irene, a slow-moving hurricane that struck the N.C. coast a year ago today. It emptied the sound of water as it lumbered past.  As the storm turned, the sound rushed in fast and furious.

“When it came back,” Stinson said, “it came in like a freight train. The wood was so old and so dry and tender, it just couldn’t hold.”

On August 29, the state activated the CAMA Emergency General Permit, which allowed property owners on the estaurine shoreline who lost their houses in Irene to rebuild within the existing footprint. Doug Huggett, manager of major permits for the N.C. Division of Coastal Management, said the Stinson permit was granted because it met the standards in the rule on non-conforming structures, even though the house was over the water. He said it was expedited under the emergency permit because of the “need of the applicant and financial concerns.”

“We try to be expedient as we can after a storm for folks who have been damaged,” Huggett said.

He said the nonconforming rule also allowed some storm-damaged fishhouses in Carteret County that were over water to rebuild.

“There was no bending of the rules here, because the rule we have gave us the full legal latitude we need to allow for permitting,” he said.

“This was a very legitimate permit action. This didn’t give us any heartburn . . . because it was what the rule was written to provide for.”

Stinson learned on Dec. 15 that the permit was issued. “It was an early Christmas present,” he said.

Pereira said he has cut his price by two-thirds to help the Stinsons rebuild a close replica of the destroyed house, but stronger. The pilings, he said, will be 2.5-feet above the 9-foot flood level, which is 18-inches higher than required.  The load-bearing beams and corners will be secured with salt-resistant brackets.

Rather than seeing his loss as bad luck, Stinson said he chooses to view it as God saying it was time for something better. At the same time, he is grateful to Pereira and many others who have extended themselves to help bring back the cottage that meant so much to his family. He’s taken out a second mortgage on his Greenville residence to finance the estimated $150,000 cost — so far, the family has raised about $10,000 —- and is confident that resurrecting the Stinson Ranch is worth the risk.

“We just feel like every penny we need is going to be provided,” he said. “We just hope that it will somehow acquire the character and charisma that it had before. And there’s no reason it shouldn’t.”