When legislation clearing the way for fracking in North Carolina’s Deep River basin first appeared it was part of an overhaul of state energy policy that also included a push to develop offshore development as well.

The final fracking bill, which became law last month over Gov. Beverly Perdue’s veto, is stripped of the offshore language, but that doesn’t mean the end of efforts to spur exploration for oil and natural gas off our coast.

Although no legislation on offshore development became law in the last session of the N.C. General Assembly, there were several indications of where a Republican-led legislature might be headed. As with fracking, the twin themes pushing offshore exploration are jobs and energy independence.

One hint of the legislature’s direction is a leadership-sponsored N.C. Senate resolution on energy policy, proposed during the recent short session, that endorses offshore exploration. It cites work by a legislative subcommittee on Offshore Energy Exploration that says federal waters off North Carolina hold upwards of 30 trillion cubic feet of natural gas and that developing the resources would lead to 6,700 jobs, add $659 million to the state’s economy and yield nearly $500 million per year in state revenues.

Molly Diggins, state director of the North Carolina chapter of the Sierra Club, said there is concern that with fracking legislation out of the way, the legislature will restart its push for offshore exploration.

The offshore issue was complicating the legislature’s drive to get fracking done, Diggins said. But bill’s predecessor, the 2011’s Energy Jobs Act, made clear early on the legislature’s intent for a new state energy policy. The bill promoted offshore oil and natural gas production. Perdue vetoed it.

“There’s seems to be a national ‘all of the above’ approach,” Diggins said. “(In North Carolina) it’s all of the below — any drilling for fossil fuels.”

The legislature is pursuing a risky approach, Diggins said, especially considering that the jobs talked about would take a long time to materialize.

“Drilling as a jobs program really doesn’t hold up to scrutiny,” Diggins said.

It would take 20 years for the industry to crank up, she said, and that’s only if the resources are worth the effort.

Sam Pearsall of the Environmental Defense Fund said it’s unclear what the legislature might do in the coming year to promote offshore energy and uncertain as to what the state can do to influence federal policy that has so far kept exploration out of the Atlantic.

“These are federal lands and it’s a federal decision,” Pearsall said. “There’s been a fair bit of posturing with offshore oil development.”

Diggins and Pearsall expect the issue to come up during the gubernatorial election cycle, especially since Pat McCrory, the Republican candidate, has spoken in favor of opening up the Atlantic region to exploration.

The federal Bureau of Ocean Energy Management’s recently released five-year oil and gas leasing plan maintains roughly the same policy on Atlantic exploration it has since exploration halted three decades ago. The agency, which manages energy exploration and production in federal waters, won’t schedule any lease sales through 2016, the duration of the plan. Bureau officials want to allow surveys in the Atlantic starting next year to get a better understanding of where development might potentially happen.

The bureau closed the comment period on the survey’s environmental plan on July 2. The plan includes seismic and sonar tests in the Carolina Trough and other areas of potential off the N.C. coast. A public meeting in Wilmington on the plan drew hundreds of people, many expressing concern about impacts on marine mammals in the survey area.

John Filostrat, spokesperson for BOEM, said Ken Salazar, Interior secretary, is expected to make a decision on the testing plan in January.

Filostrat said the BOEM is interesting in developing new information on the ocean floor in areas like the Carolina Trough to get a more accurate picture of the resources.

“The last surveys in the mid-Atlantic were done 30-plus years ago,” he said.

The BOEM five-year plan cites the need to get a better idea of the location of potential development to head off jurisdictional disputes between states and conflicts with the Department of Defense, which wants to limit how much of the area could be developed. 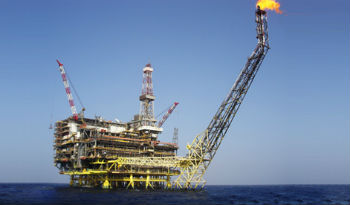 The plan notes a range of support and concerns among the Atlantic coast states on offshore development. It also says that one of the key reasons leases were not considered was the lack of infrastructure, including spill response and called for long-term analysis and planning for the infrastructure to support exploration.

The state’s role in that planning has yet to take shape. The new State Mining and Energy Commission, which was created under the fracking bill, was given authority to regulate and assist in the development of the state’s oil and gas resources, but under the law its regulations on fracking would not apply to “oil and gas exploration and development in the waters of the Atlantic Ocean and the coastal sounds.”

That may bring some relief to environmentalists since the commission is already under fire for being heavily stacked with appointees friendly to the oil and gas industry.

In the months ahead state action on offshore exploration is likely to come from the new Joint Legislative Commission on Energy Policy, which was also created under the fracking legislation, and has broad oversight powers over the Mining and Energy Commission and all state and local energy policy making bodies.

Perdue has yet to sign off on coastal policy legislation that includes controversial provisions on sea-level rise predictions.

The bill is one of a handful left on the governor’s desk since the legislature’s adjournment in early July. It is among a group of bills environmental groups have asked Perdue to veto.

Perdue spokesperson Greg Thomas said a decision has not been reached on what to do about the bill, which sets a four-year moratorium and spells out the rules for further study before the state adopts any new standard on the rate sea-level rise.

“The governor has until August 2,” Thomas said. “Right now, all we can say about it is the bill is under review.”

The legislation passed the House on July 2, the last day of the session, 68 to 43, a margin that’s one vote shy of what it would take to override a veto.