MAPLE HILL — A building supply company is once again seeking a permit to operate a rock quarry in this small Onslow County community.

Martin Marietta Materials Inc. has filed another application for a special-use permit with the Onslow County Board of Adjustment, whose members are expected to decide during their meeting Tuesday whether the application is substantially different from the one the multi-million company filed more than two years ago.

The Raleigh-based company, which is the nation’s second largest producer of construction aggregates, filed an application in August 2010 to mine a limestone quarry within 1,831 acres in Maple Hill, a proposal met by staunch opposition from residents and environmentalists.

Opponents argued then, and now, that a quarry is not a suitable use at the proposed site for a number of reasons, including the fact that the land neighbors six hog lagoons and is near one of the state’s most biologically significant areas.

The county Board of Adjustment agreed, denying the 2010 special-use permit application.

Board members concluded that the proposed quarry would “substantially injure the value of adjoining or abutting property.”

Among the concerns listed by the board: Hog lagoons are within 200 feet of the proposed quarry site. Martin Marietta did not provide any information as to what effect mining in the area could potentially have on the value of surrounding hog farm operations, the board concluded.

The company proposes to pump upwards of nine million gallons of water a day out of the aquifer to keep water out of the quarry. Mining would lower the level of water in residential wells near the proposed site, an impact the company did not take into account, according to the Board of Adjustment’s February 2011 decision.

The board also determined that the mine was not a public necessity and that the proposed quarry, “will not be in harmony with the area in which it is to be located.”

Paxton Badham, vice president of land and environment for Martin Marietta, said the company has addressed residents’ concerns in its latest permit application.

“We made what we thought are significant changes and we filed again,” he said. “We’ve got lots more buffer built into the plan. It’s many more acres. Hundreds of more acres of buffer.”

The company initially proposed a buffer area 215 feet wide along the property, which would include a combination of vegetation and a berm topped by a four-foot-tall barbed wire fence.

“The berms have been set back a little bit and they’ll be putting in monitoring wells and that’s the extent of it,” Yopp said. “There is an area that is too wet for them to quarry in. They have taken that out of the equation. They have deducted 500 acres but it’s not from the actual quarry itself.  They’re still going to be digging in the same place.”

Yopp said he and other Maple Hill residents are concerned about the massive amounts of water the company plans to pump onto the land, flowing into nearby ponds and streams.

The quarry would also generate more traffic – an estimated 200 trucks a day – onto rural roads like N.C. 50.

This is not the type of industry many residents of this quiet community, dotted with family farms and single-family homes surrounded by forests, want, Yopp said.

He was a young man when he bought 70 acres of undeveloped land in Maple Hill more than 30 years ago.

Today, horses roam Yopp’s farm. He grows a variety of crops. This is where he plans to retire. His land abuts the property Martin Marietta wants to mine.

“It’s a pretty piece of land and I don’t want the environment destroyed by a mining company,” he said.

Janine Dunn expresses similar sentiments about her land – a small, 38-acre farm peppered with several gardens, a horse, goats and chickens dependent on four ponds on the property. She lives off Haws Run Road directly across the street from the proposed site.

“A quarry is not something that is welcomed here,” Dunn said. “We can’t see where it is an economic boom when it is destroying our living environment. What difference is a buffer going to make? They can’t change where the rock is. They’re still looking for the same thing. They’re still getting it out the same way. They’re still going to be moving it down the same roads.”

The Maple Hill Savannas, a cluster of what are identified as Significant Natural Heritage Areas by the state’s Natural Heritage Program, protect rare plants and animals unique to Onslow and Pender counties. 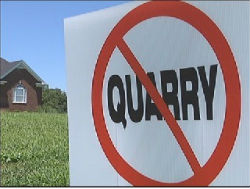 Several environmental groups, including the N.C. Coastal Federation, White Oak-New Riverkeeper Alliance, PenderWatch & Conservancy, Cape Fear River Watch and the Audubon North Carolina are opposed to the proposed quarry. The N.C. Nature Conservancy, N.C. Division of State Parks and the N.C. Natural Heritage Program have also sent letters to the Onslow County Board of Adjustment expressing concern about potential effects to the environment.

Todd Miller, the federation’s executive director, earlier this month compiled a report for Maple Hill residents on why the proposed quarry fails to comply with four conditions required for a special use permit.

The quarry will endanger public health and safety because of the amount of water Martin Marietta plans to pump from the ground, Miller states.

“Removing this much groundwater could cause the formation of sinkholes in or around the mine,” Miller writes. “Sinkholes occur in this area already, and this huge amount of pumping of groundwater could make them much more common.”

The U.S. Geological Survey is attempting to develop a model to evaluate the consequences of withdrawing groundwater. Until that study is complete, how much of a negative effect groundwater pumping may have on the community will remain unknown.

Miller also argues that the mine is not a public necessity, will detract from the rural quality of life, hurt property values and is incompatible with the county’s land-use plan. The property is zoned rural agriculture.

If the Board of Adjustment decides that Martin Marietta’s latest special-use permit application is not significantly different from the previous application the matter “won’t go any further,” said Sue McLaughlin, chief Zoning and Enforcement Officer with the Onslow County Planning & Development Department.

Should the board agree that the application is sufficiently different, its members will hear the case during a Feb. 25 meeting.

Tuesday’s meeting will be held at 6:30 p.m. in the Onslow County Health Department auditorium, 612 College Street.